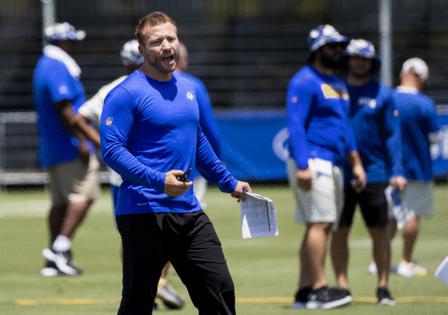 LOS ANGELES — After leading the Rams to two Super Bowls and a championship in five seasons, Sean McVay ranks among the NFL’s most successful coaches.

Now he is no doubt among the highest paid.

McVay said Tuesday that he has a new contract, and though the Rams did not release details McVay is thought to have received a five-year deal that puts him at or near the top of the NFL coaches’ salary list.

McVay, 36, has compiled a 55-26 regular-season record and is 7-3 in the playoffs, including a 23-20 victory over the Cincinnati Bengals in February in Super Bowl LVI at SoFi Stadium.

Kevin Demoff, the Rams’ chief operating officer, said in March that McVay and general manager Les Snead were “the architects of this run,” and that both were in line for extensions after the Rams completed their boom-or-bust season with the Super Bowl victory.

McVay was courted by broadcast outlets after the Super Bowl victory, so the Rams almost certainly moved quickly to reward McVay.

At the outset of training camp, when asked about the status of his contract, McVay said, “We’re in a good place.” He said Tuesday that his answer was in reference to not only his status but also Snead’s.

Asked Tuesday if he had a new contract, McVay acknowledged that he did.

“Les and I have always been a pair,” McVay said. “We wanted to be able to kind of announce that when both of us had gotten done.

“Mine is done. Les is in the process of that. … It is very important for Les and I to have that represented, that we are a partnership and a pair.”