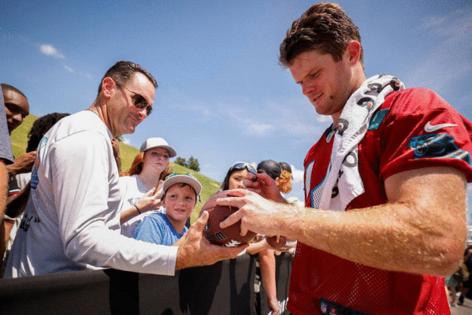 SPARTANBURG, S.C. — As Sam Darnold walked off the practice fields at Wofford College on Monday, Carolina Panthers general manager Scott Fitterer pulled him aside for a quick conversation.

Unannounced to Darnold, a report surfaced early Monday that the Panthers may be actively shopping him as the team began to practice. Fitterer told Darnold to “not worry” about any trade rumors.

Shortly after the report — which was later deleted — The Charlotte Observer reported that the Panthers were “not shopping” Darnold, citing multiple league sources with direct knowledge of the situation.

Darnold has been in competition with Baker Mayfield for the starting job during training camp. They again evenly split first-team reps during Day 10 of Panthers practice.

After practice, coach Matt Rhule said the team is not trying to trade Darnold.

“I haven’t had those conversations,” Rhule said. “We’re in the middle of a quarterback battle. I assume along with quarterback battles, things like that are going to be said. But nothing has been said to me by Scott or anybody that we’re in that.”

Fitterer acquired Mayfield with the intention that he would compete with Darnold and rookie Matt Corral. That plan has not changed, even though Mayfield is emerging as a favorite to start Week 1 as he is consistently outperforming the other quarterbacks.

Even if the team is shopping Darnold, he’d be difficult to move. His $18.9 million, fifth-year option is fully guaranteed and too large of a salary for a new team to take on. Mayfield, who is also playing on his fifth-year option, took a $3.5 million pay cut just to join the Panthers.

“I talked to Scott. He said not to worry about it,” Darnold said. “So to be honest, before he even talked to me, I didn’t even see it. So I’m just going to continue to do me and do what I can to put myself in a good position and put this team in a good position.”