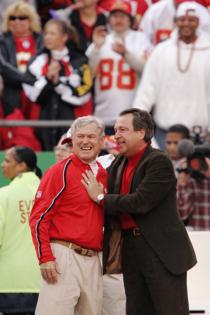 KANSAS CITY, Mo. — Not long after Carl Peterson became a graduate-assistant football coach at UCLA in 1973, he encountered then-Los Angeles Rams assistant Dick Vermeil as the Rams conducted practices at UCLA. Even in Vermeil’s subordinate role, Peterson was struck by his charisma and energy.

Enough so that when Vermeil was hired to take over as UCLA’s head coach after that season, not only was Peterson in need of the job, but he also was particularly eager to work with Vermeil.

Never mind that Vermeil had someone else in mind for that receivers coaching position and initially had decided not to retain Peterson.

While Vermeil was finishing up that tenure with the Rams preparing for the playoffs, he conducted his UCLA interviews between midnight and 3 a.m. to finalize a staff that needed an administrative assistant, too.

So … Peterson kept showing up around midnight, night after night.

Finally, as Vermeil yet again emerged from his office in the early morning hours and saw the resolute would-be assistant leaning on the fender of Peterson’s ‘69 Volkswagen (“a truly great” car, Peterson says to this day), Vermeil was irresistibly compelled by Peterson’s determination.

“‘If that job means that much to you,’” Vermeil recalled saying, “‘I want you on my staff.’”

That’s how Vermeil and Peterson became what Vermeil calls “hooked (at) the hip.”

Some 50 years later, that scene is no mere nostalgia but at the crux of why Vermeil was named to the Pro Football Hall of Fame in Canton, Ohio, and was to be inducted on Saturday.

They’ll be entwined again there as Peterson will present Vermeil for the honor of a lifetime.

I would have thought differently on draft day, when they were elated to snag the soon-to-be-24-year-old ...Read More

Talk about taking the bite out of the first preseason game. The Patriots fielded mostly rookies and backups against the Giants on Thursday, giving fans a healthy dose of ...Read More

As the temperature spiked and tempers flared, with no less than a half-dozen dust-ups that sometimes led to fisticuffs, somebody should’ve hosed down these undisciplined Broncos and churlish Cowboys and sent them all to ...Read More