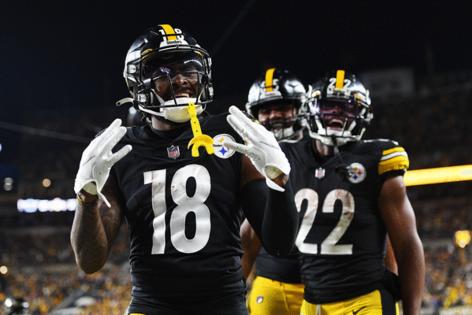 PITTSBURGH — "We would love to have him be with the Steelers for the rest of his career."

"We want Bud Dupree to finish his career as a Pittsburgh Steeler."

"We hope he's going to be a Steeler for a long time."

Well, they got one of 'em right.

The decision by wide receiver Diontae Johnson to suddenly lessen his contractual desires and sign a new three-year, $39.5 million contract that included a $17.5 million signing bonus was a wise and risk-free move by him and a team-friendly one for the Steelers.

But even though the two sides were far apart in contract talks while Johnson continued his "hold-in" during training camp, a deal quickly came together Wednesday night for several reasons, one of which was Mike Tomlin encouraging both sides to come to some form of agreement. The other was Johnson and his representation deciding it was time to get something done.

I would have thought differently on draft day, when they were elated to snag the soon-to-be-24-year-old ...Read More

Talk about taking the bite out of the first preseason game. The Patriots fielded mostly rookies and backups against the Giants on Thursday, giving fans a healthy dose of ...Read More

As the temperature spiked and tempers flared, with no less than a half-dozen dust-ups that sometimes led to fisticuffs, somebody should’ve hosed down these undisciplined Broncos and churlish Cowboys and sent them all to ...Read More