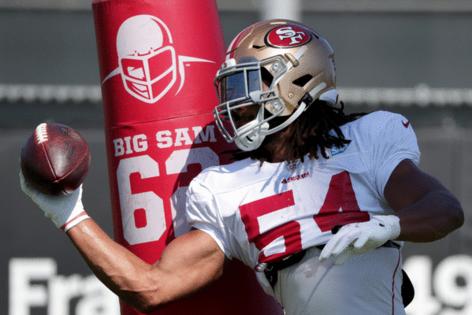 It gave wide receiver Marcus Johnson a concussion, and it also stirred debate on how physical the 49ers are.

Coach Kyle Shanahan, speaking Friday for the first time since Tuesday’s hit-triggered brawl, did not condone Warner’s actions or much of the aftermath, aside from Brandon Aiyuk rushing to combat Warner for leveling Johnson.

“I love the intensity of it. I don’t think you have to fight to be intense, though,” Shanahan said. “Scuffles are scuffles, but then they lead to other stuff.

“We have a guy in (concussion) protocol because we took an unnecessary shot on someone, which led to the big fight, and then we had a bunch of haymakers thrown in there, which only break hands.”

To clarify, no one is known to have sustained a broken hand. However, Johnson is “recovering slowly,” thus hindering his roster chances as a sixth-year veteran who signed in free agency.

Immediately after Warner’s hit, he was confronted by Aiyuk, and a melee ensued. Shanahan paused practice to admonish his team, and no further fights have taken place over the 2 1/2 practices since then.

“Our team is pretty team, we’re pretty physical. If people voted who was the most physical team on tape last year, we’d probably win that,” Shanahan added. “We didn’t get in one fight last year. That doesn’t totally pertain to toughness.”

As for Aiyuk’s actions, Shanahan added: “I understood what he stood up to. It didn’t bother me.”