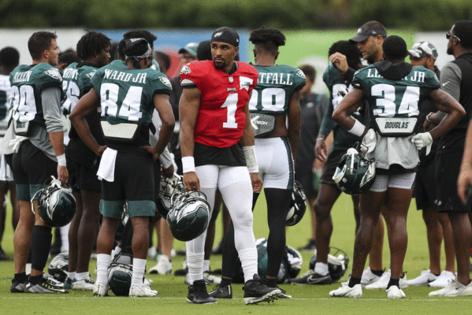 After a full day of training camp — practice, walk-through, meetings — Hurts on Monday evening sat for 16 minutes and 30 seconds with Ike Reese and Jon Marks, who host the afternoon show on 94-WIP. The conversation was remarkable for its candor and its ease.

Maybe that’s because of the presence of Reese, who spent the first seven seasons of his nine-year career with the Eagles. At any rate, Reese asked Hurts the sort of question Hurts has rebuffed since he landed at Alabama in 2016. This time, Hurts answered. And he answered correctly.

“We all set goals,” Reese began. ”What’s something that you want to improve on?”

“I think processing stuff,” Hurts replied, without hesitation. “Seeing it. And being consistent in that.”

This might not sound particularly revealing, forthcoming, or frank. For Hurts, who generally tosses word salads like a pantry chef, it was the stuff of a confessional.

Hurts, at 6-foot-1, knows he lacks the size advantage of other star quarterbacks: Justin Herbert is 6-6, Josh Allen is 6-5, Joe Burrow is 6-4, and Patrick Mahomes is 6-3. He’s never going to have the arm strength of those players, or even of other studs of lesser stature, like Russell Wilson or Kyler Murray.

But Hurts knows that if he can recognize coverages before the snap, and if he can manipulate defenders during a play, and if he can anticipate windows opening, then he can develop the timing and the accuracy and the mechanics that will compensate for his physical shortcomings.

Hurts also knows that, as long as he’s in Philadelphia, where offensive line is king, he’s going to have plenty of time to make decisions. He just needs to make the right ones.