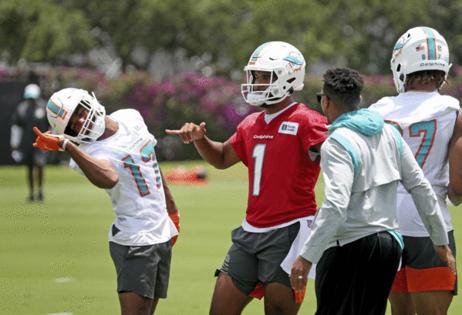 “I think Tua is on a one-year trial to prove he’s the Dolphins’ guy for the future. If not, Miami is loaded with draft ammunition to move up for Alabama’s Bryce Young or Ohio State’s CJ Stroud in 2023.”

But here’s the problem with that:

The teams who all likely need long-term quarterbacks are expected to be the worst teams in the league this season: Atlanta, Detroit and Houston.

Carolina, the Giants, Washington and Seattle — who all need long-term answers at quarterback — also could have top-10 picks.

That’s seven teams — who are all worse than the Dolphins on paper — who will probably need new quarterbacks, unless Davis Mills (Houston) and Daniel Jones (Giants) and Drew Lock (Seattle) take major leaps and Carson Wentz (Washington) becomes the Eagles’ Super Bowl version.

Pittsburgh could be in the market for a quarterback again if rookie Kenny Pickett disappoints.

So none of these teams are likely going to be inclined to skip the chance to draft an elite quarterback in exchange for the Dolphins’ two first-round picks in 2023 and one first-rounder in 2024.

Even if Miami threw in a second-rounder and one or both of its 2023 third-rounders, why would any team desperately needing a quarterback bypass the chance to draft one?

LOS ANGELES — A day after testing his arm with a heavy workload in an intrasquad scrimmage, quarterback Matthew Stafford said Wednesday he was "right on track" as the Rams prepare for their Sept. 8 opener against the ...Read More

The 49ers are in Minnesota this week for two joint practices with the Vikings. A few hours from Trey Lance�...Read More