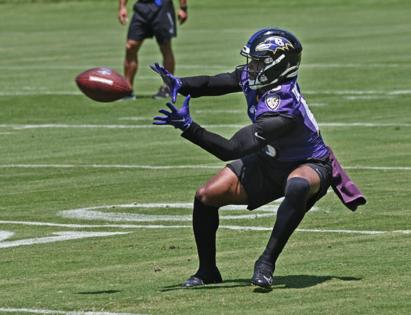 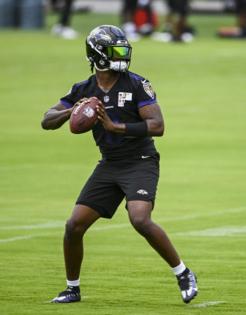 The opening was small, about as wide as a kid’s-size hula hoop, which meant the throws had to be perfect. But in the late-morning hours of the Ravens’ final mandatory-minicamp practice earlier this month, as quarterback after quarterback dropped back to pass, the target might as well have been a ring toss carnival game.

From about 20 yards away, passes caromed off the target’s exterior, or landed short of the opening, or sailed over, or missed wide. Not until Lamar Jackson finally laced a throw into the net a few minutes into the drill did the thwang of a bull’s-eye ring out over the practice fields in Owings Mills.

As Jackson and the Ravens continue their contract negotiations this summer, off-and-on talks that have invited the same kind of disbelieving commentary, there’s work to be done on the field, too. Jackson is coming off his worst year as a passer in his three seasons as an established starter. His interception and sack rates were the highest of his career, and his passer rating was his lowest since his rookie year.

But for as much as Jackson’s strong minicamp performance pointed toward a resurgent 2022, it couldn’t answer one of the most critical questions facing the Ravens’ passing game: How much can a lackluster downfield attack improve after trading away its most established deep threat?

Wide receiver Marquise “Hollywood” Brown finished tied for sixth in the NFL last season in targets of 20-plus air yards (28), according to Sports Info Solutions. No other Ravens player had more than 19 targets, and no other Baltimore wide receiver had more than eight. In dealing Brown to the Arizona Cardinals during April’s NFL draft, the Ravens wagered that they could compensate for his loss elsewhere. But after their long-ball struggles last year, they can’t afford to fall off any further.

“It was something that Coach [John] Harbaugh wanted us to improve on, and us as an offense, as players and coaches, wanted to improve on, so it’s been an emphasis,” Ravens wide receivers coach Tee Martin said during minicamp. “We’ve been pushing the ball down the field more in individual drills, before we even get to seven-on-seven and things of that nature, and just really seeing what we are. It’s hard to correct something if you don’t know what the issues are, and so we’ve been making that more of an emphasis and getting more reps at that, and we’ve been seeing improvement.”

The Ravens’ leaky offensive line, which allowed the second-most sacks in the NFL last year (57), was to blame for some of Jackson’s longer-developing drop-backs. But even when he wasn’t pressured, Jackson struggled with his accuracy downfield. Among the 38 quarterbacks with at least 10 unpressured deep throws last season, he ranked 25th in accuracy (36.4%, just behind the Pittsburgh Steelers’ Ben Roethlisberger), 22nd in catchable-pass rate (59.4%), 17th in on-target rate (53.1%) and 27th in passer rating (66.0).

Part of the problem was Jackson’s frayed connection with Brown, his favorite deep threat. Only seven wide receivers were targeted downfield as often or more often than Brown in 2021, yet 18 wide receivers had more receptions of 20-plus air yards than Brown. Drops were a problem; Brown finished with four over his 28 targets. Jackson misfired often, too.