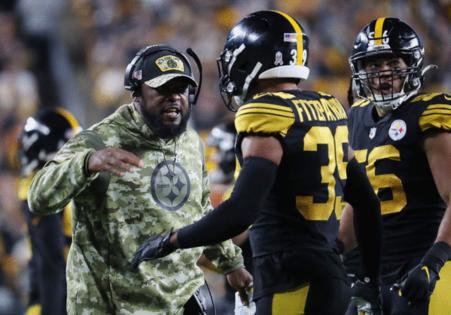 PITTSBURGH — The questions were soft to Mike Tomlin. The hosts of The Pivot podcast didn't ask about his recent playoff failures or the troubling number of players who have quit on him, most recently Melvin Ingram. This wasn't that kind of interview. The interrogators were former NFL players, their adulation for Tomlin evident. They practically gushed in his presence. The final 10 minutes were almost nauseating.

Having said all of that ...

The Pivot's 90-minute interview last week with Tomlin was sensational.

A relaxed Tomlin, sitting in his favorite easy chair in the basement of his home, wearing a T-shirt from his favorite charity, Man-Up Pittsburgh, showed a side of himself no one had seen in his 15 seasons as Steelers coach. He was thoughtful, candid, often inspiring. He made you want to put on shoulder pads and a helmet and play for him. All the credit goes to hosts Ryan Clark, Fred Taylor and Channing Crowder, who were able to pull back the curtain on what makes Tomlin tick. Clark played for Tomlin for seven seasons, helped him win Super Bowl XLIII and clearly is one of his favorites. "All he has to do is call and the answer is yes," Tomlin said.

It's a good thing Clark called to set up this interview.

"My failure as a player, I could never live with," Tomlin said early in the podcast, drawing understanding nods from the three former players. "I wanted to be a great player, and I wasn't. I never got over that. I take that same energy into coaching. I think that's why we all coach. We don't want to admit it, but we coach because we can't play, we could never play or we can no longer play."

Tomlin said he had no idea how his coaching career would go when he took his first NFL job at 28 in 2001 as Tony Dungy's defensive backs coach with the Tampa Bay Buccaneers. Tomlin, who came from a broken home, fretted about how to juggle the demands of his coaching position with fatherhood. He and his wife, Kiya, had a 3-month-old son, Dino, at the time. Tomlin said Dungy taught him plenty about taking care of his family, but he had to win the respect of his players — some were older than him — on his own.

"As I established a resume, I didn't change that work pattern. I didn't change that mentality. Coaching is real simple to me. You help players realize their dreams. You help them feed their families. Then, in turn, you eat. How do I stay motivated? The men I'm working with change every year. ... I'm a competition junkie. I need it. I love it. I love being around it. That's what makes this game special."

Tomlin talked at length about a winning culture.