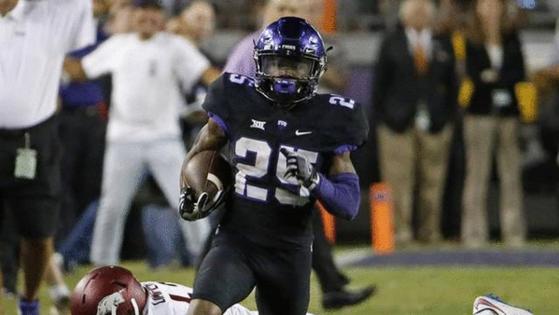 Then-coach Gary Patterson kicked Turpin off the team after the returner was accused of assaulting a girlfriend.

On Thursday, Turpin was named the MVP of the USFL.

It’s still a long shot, but his performance may lead to the chance he covets, which is a look by an NFL team.

Turpin’s New Jersey Generals finished 9-1, and he led the league in receiving yards and yards after catch. He also had 44 receptions and four touchdowns.

He led the USFL in punt return average and was the one who player who scored a touchdown on a kick return.

The success of the Miami Dolphins’ Tyreek Hill, who is not exactly tall and is no stranger to off the field issues from his collegiate days, could convince an NFL team to give Turpin a tryout.

After Turpin pleaded guilty in the spring of 2019 to assaulting his girlfriend, he was banned from participating in TCU’s Pro Day. He held his own Pro Day.

It didn’t matter. The NFL wanted no part of him.

BALTIMORE — The Ravens need a No. 2 running back to complement starter J.K. Dobbins in the early part of the regular season, and veteran Mike Davis got closer to filling that role with a strong effort in the team’s 23-...Read More

If the late Bob Kuechenberg wrote a column about his Hall of Fame chances ...

I’ve been gone going on four years now. Dead and buried. It wasn’t my idea at that time, but even worse is what’s happened ...Read More

LOS ANGELES — Star players came through for the Los Angeles Rams the last time they played at SoFi Stadium.

NEW YORK — The Jets preseason started about as poorly as you can imagine. Now they wait to see the consequences.

Quarterback Zach Wilson limped off the field with a knee injury in the first quarter of Friday’s ...Read More

KANSAS CITY, Mo. — Legendary quarterback Len Dawson, who led the Chiefs to their first Super Bowl triumph and was with the Kansas City NFL organization for six decades as a player and broadcaster, has entered hospice ...Read More