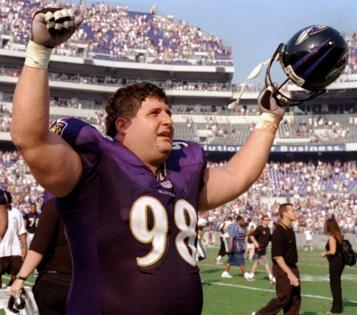 BALTIMORE — June 22, 2022, has become the saddest and longest day in Ravens history.

Early in the evening, a team spokesman confirmed that former Ravens defensive tackle Tony Siragusa died at age 55. The cause of death was not immediately known.

The impact of the news was felt throughout the organization.

“We’ll get through it. My prayers are with this team and this organization. That’s who we are.”

Only a few guys in the Ravens’ 26-year history exemplified toughness better than the 6-foot-4, 330-pound Siragusa. At the same time, he became a voice for a team in search of leadership.

Some of the old Baltimore Colts fans compared Siragusa with late Hall of Fame defensive tackle Art Donovan, but Donovan was the happy-go-lucky type.

Siragusa could be loud, obnoxious, vicious, pleasant and humorous, but he was a great teammate. If you took a cheap shot at any of the Ravens, you had to answer to Siragusa or his top henchman, defensive end Rob Burnett.

“First of all, my deepest condolences to his family,” Marvin Lewis, the architect and coordinator of the 2000 Ravens’ record-setting defense, said in a statement. “With Tony as a friend and teammate, you needed no other. He played and lived life to the fullest. He always reminded me to have fun.”

TAMPA, Fla. — For the second time in five months, Bucs fans have felt the blunt force of a major retirement announcement etched on social media.

Which is a far cry from stone.

The headline — ‘Deshaun Watson settles 20 of 24 sexual misconduct lawsuits against him’ — suggests sports’ saddest saga and the NFL’s current biggest embarrassment is nearing an end.

And this is ...Read More

As rumors have circulated the last few months about whether the Seattle Seahawks could be put up for sale, sources close to the situation have stated categorically that the team is not currently on the market.

BALTIMORE — The death of Ravens outside linebacker Jaylon Ferguson is different because he played in Baltimore.

After nearly 35 years of sportswriting, you become immune to the highs and lows of professional sports, ...Read More