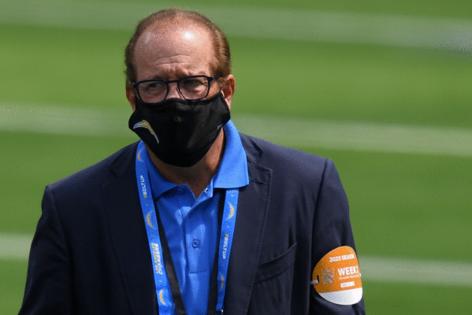 LOS ANGELES — Chargers owner Dean Spanos has been accused of "misogynistic" behavior and repeated "breaches of fiduciary duty" by his sister in a petition for an existing probate case that this week advanced the siblings' ongoing legal battle regarding ownership of the team.

The petition was filed in San Joaquin County Superior Court by attorneys representing Dea Spanos Berberian, who seeks control of a family trust that makes up 36% of the Chargers' ownership.

Spanos and Berberian were left as co-trustees of the trust following the deaths of their parents, Alex and Faye, in 2018.

In the petition, Berberian accuses her brothers Dean and Michael of repeatedly acting "out of their deeply-held misogynistic attitudes and sense of entitlement as the men in the family."

The filing states that Dean and Michael "believe to their cores that, regardless of what their parents intended and their wills specified, men are in charge and women should shut up."

Dean Spanos took over as the Chargers managing owner in 1994, 10 years after his father bought the franchise.

The legal conflict between the Spanos siblings came to light in April 2021, when Berberian petitioned the Los Angeles County Superior Court to put the trust up for sale, citing mounting debt.

LOS ANGELES — A day after testing his arm with a heavy workload in an intrasquad scrimmage, quarterback Matthew Stafford said Wednesday he was "right on track" as the Rams prepare for their Sept. 8 opener against the ...Read More

The 49ers are in Minnesota this week for two joint practices with the Vikings. A few hours from Trey Lance�...Read More