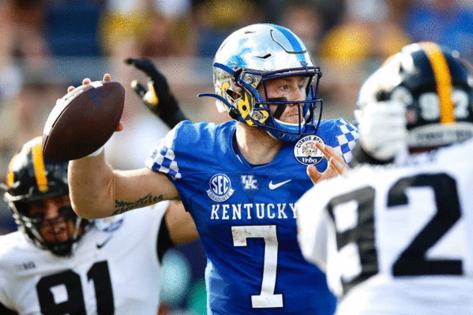 Will Levis is riding the hype train. From out of nowhere, the Kentucky quarterback is a current hot commodity where next year’s NFL Draft is concerned. ESPN’s Todd McShay put Levis No. 8 in his way-too-early 2023 mock draft. CBS Sports upped the ante, christening the senior-to-be the No. 1 overall pick in a mock.

No. 1 overall? In 2023? That’s right, two weeks back, Chris Trapasso of CBS Sports tabbed Levis as the No. 1 overall pick of the Houston Texans, provided of course that the Texans wind up with the first overall selection. We only have 272 regular-season games and the NFL playoffs between now and then.

Pop quiz: Name the last Kentucky offensive player to be selected in the first round of the NFL Draft? If you dialed your way-back machine to 1999 and Tim Couch, the No. 1 overall selection of the then expansion Cleveland Browns, you have a long memory.

So could Will Levis really end up as the No. 1 selection in the 2023 draft?

Already the pushback has begun.

Senior Bowl executive director Jim Nagy tweeted last week, “Just watched a QB prospect being mocked/talked about in upper tier of next year’s class that, unless the 2022 tape looks drastically different, has zero chance of getting drafted next April. The ‘way too early’ stuff on here is absolutely wild.” Some assumed he was talking about Levis. Never mind that on April 8, the very same Nagy had tweeted, “There’s a lot to like about Will Levis.”

“I don’t see or understand the Will Levis hype. At all,” tweeted Tyler Calvaruso of 247 Sports.

For those of us who actually watched Levis take every snap in 2022, the pro hype is no surprise. Levis has the size. He’s 6-foot-3, 232 pounds and solid. He has the arm strength. He can grip-it-and-rip-it. He’s mobile. He has the leadership abilities. Practically from the moment Levis stepped on campus, after transferring from Penn State, he has embraced being the face of the program.

He also played in an NFL-style offense last year under then-coordinator Liam Coen, who brought Sean McVay’s playbook to Lexington. And Levis will do so again in 2022, if in a slightly different NFL offense. After Coen returned to Los Angeles to be the Rams’ offensive coordinator, Mark Stoops hired Kyle Shanahan’s quarterbacks coach, Rich Scangarello, to add a San Francisco 49ers’ twist to what Coen started.

Still, the guess here is that those bullish on Levis expect him to take another step forward next season. He was 233-of-353 last year for 2,826 yards with 24 touchdowns and 13 interceptions. The scouts would love to see a rise in the TD numbers and a decline in the turnovers.

Levis says his goal is to raise his completion percentage from 66 percent last year to 70 percent this season. It’s a worthy goal. Seven FBS quarterbacks completed 70 percent of their passes in 2021. Eight did so in 2020, including two quarterbacks now starting in the NFL — New England’s Mac Jones and the New York Jets’ Zach Wilson.

Levis will be breaking in a nearly new receiving corps. Gone is Wan’Dale Robinson, a second-round pick of the New York Giants in the 2022 NFL Draft. Gone too is the dependable Josh Ali.

One thing is for sure, given the hype, Levis will have a target on his back come fall. He’ll be scrutinized and analyzed. The guess here is that won’t bother him one bit. He’ll welcome the challenge and rise to the occasion. His mission: Prove his skeptics wrong and his supporters right. And win games along the way.