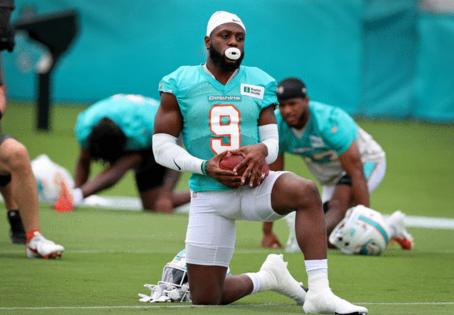 The talent level has never been in question.

The blend of speed and athleticism is what motivated the Miami Dolphins to select Noah Igbinoghene as their final of three first-round picks, the 30th player selected in the 2020 NFL draft.

His work ethic is supposedly stellar. People who have worked with him have raved about it since his days at Auburn.

Unfortunately, Igbinoghene wasn’t able to turn that talent and work ethic into reliable play in his first two NFL seasons.

And when you’re a first-round pick the bar is set high, so those who fall short of contributing on a consistent basis as a high-level asset tend to fall into the potential bust category.

That’s the label Igbinoghene is flirting with heading into his third NFL training camp, and he’s not in denial about it, or his rough start.

“It’s an everyday process, so just keep going every single day and just get better,” said Igbinoghene, who has started three of the 27 games he’s played in the past two seasons. “That’s really my main focus. If I keep working, it’s going to turn out in my favor.”

Igbinoghene spent most of his young career in Brian Flores’ doghouse, but with the now fired head coach gone he’s been given a fresh start.

This spring Igbinoghene not only benefits from the clean slate provided to him by his new position coaches, Sam Madison and Patrick Surtain, two former standouts for the Dolphins, he’s also benefiting from the absence of Xavien Howard and Byron Jones during Phase 2 of organized team activates.

Those Dolphins veteran starters either aren’t healthy enough to participate this spring, or have decided to skip the voluntary workouts.