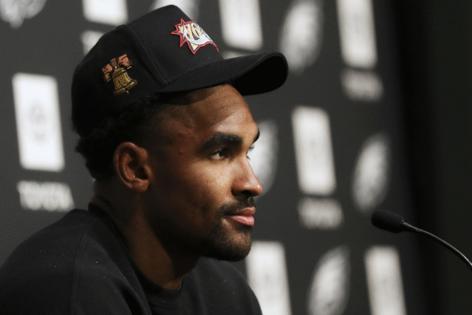 PHILADELPHIA — Here’s a fun little thought experiment that should let you know exactly where the expectations for Jalen Hurts should sit. Look at the Eagles roster and start subbing in quarterbacks other than Hurts. Each time, ask yourself: is this a Super Bowl contender? Don’t limit yourself to the obvious insta-winners like Tom Brady, Patrick Mahomes, Aaron Rodgers, and Russell Wilson. Don’t even limit yourself to the guys who look like they will soon be those guys: Justin Herbert, Joe Burrow, etc. Do it with Derek Carr, with Matthew Stafford, with Dak Prescott, with Josh Allen, with Matt Ryan, with Ryan Tannehill, with Lamar Jackson. Do it with Kirk Cousins and Mac Jones.

The most instructive case study might actually be Carson Wentz. Put this Eagles roster around Wentz in his second season as a starter or third season in the NFL. What are you expecting?

Be honest with yourself, and you should realize that there is only one way for Hurts to show that he is a quarterback who can someday lead the Eagles to a Super Bowl. He can do it this year. Because the Eagles have a Super Bowl-caliber roster. The only question is Hurts.

Don’t worry if that sounds absurd when you read it. It felt absurd to write it. But the longer you look at the facelift that Howie Roseman gave this roster, the harder it is to deny that the reality of its talent. Start with the offensive side of the ball. In A.J. Brown, they have their best wide receiver since Terrell Owens. In DeVonta Smith, they might have their second best. They have an offensive line that was already one of the best in the league and is now even deeper. Running back is running back.

Defensively, there are some potential weaknesses. But not nearly as many as existed last year. The biggest question is whether they have the edge-rushing talent to consistently pressure quarterbacks. But they have a big potential answer in free agent signee Haason Reddick, who has 23.5 sacks over the last couple of seasons. Elsewhere, they have all of the pieces a defense needs to be functional. The final piece came earlier this week in the form of James Bradberry. He doesn’t need to be the Pro Bowl cornerback he was two years ago for the Giants. He just needs to be something other than Steven Nelson.

Maybe the best way to evaluate this roster is to compare it to the one that won the Super Bowl. Again, go position by position. Offensive line? Even. Maybe a slight edge to Brandon Brooks in 2017. Then again, maybe a slight edge to Jordan Maialata in 2022. Wide receiver? No question, 2022. Running back? Call it even. Cornerback? 2022, no doubt. Defensive tackle? This year’s squad doesn’t have a single player who is as disruptive as Fletcher Cox was that year. But it probably has more talent overall in Cox, Javon Hargrave, and first-round pick Jordan Davis. Linebacker? Even. The only obvious talent gaps between 2017 and 2022 are at safety and on the edge. On offense, though, there isn’t a question.

And therein lies the point. The big question isn’t whether Hurts is good enough to keep the Eagles competitive. It’s whether he can do the things that a quarterback needs to do to maximize the talent around him. Given that he has more offensive talent around him than any Eagles quarterback since Donovan McNabb in 2004, it’s pretty clear where the bar lies. No, Hurts doesn’t need to win a Super Bowl this season. But he needs to make the Eagles look like a team that is capable of winning one. Because they are. The only question is him.

History is what it is. Anybody who is entering 2022 hoping for marginal improvement is fooling themselves. Fact is, the easiest money in the country right now is the Eagles over 8.5 wins. Open up the schedule, read it line by line, and give me a hoot or a holler any time you see a team who leaves you feeling a little bit of Quarterback Envy. You know what I mean: that feeling you get when you look at an opponent and think, “Man, I wish we had a guy like that.” In other words, count the number of times the Eagles will be playing a game in 2022 against a quarterback who is definitively better than the one they’ll be running out there.

Not Week 1 (Jared Goff), or Week 8 (Kenny Pickett or Mitch Trubisky), or Week 9 (Davis Mills), or Week 14 (Daniel Jones), or Week 15 (Justin Fields), or Week 17 (Jameis Winston), or Week 18 (Jones again). That’s seven games. And those are just the weeks where Hurts has a strong argument as the best quarterback on the field. Does Kirk Cousins really give the Vikings an advantage at Lincoln Financial Field in Week 2? How about Wentz in Weeks 3 and 10? You can certainly project the Cardinals and Jaguars to have an edge in Kyler Murray and Trevor Lawrence. But apart from a brutal three-week post-Thanksgiving stretch where they face Matt Ryan and the Colts, Rodgers and the Packers, Ryan Tannehill and the Titans, there aren’t many games where you look at the matchup and think, “Welp, that’s a loss.”

10-7 is not a successful season. A wild-card win is not a successful season. The only reason the Eagles aren’t being mentioned among a small handful of Super Bowl favorites is the quarterback. The NFL is a bottom-line business, and the bottom line is how Hurts needs to be judged. If you believe he has what it takes to someday lead the Eagles to a Super Bowl, then you believe that the Eagles have what it takes to contend for one this year. The teams that get stuck in quarterback purgatory are often those who do not set the appropriate expectations. The talent on this roster makes it clear where the expectations for Hurts and the Eagles should lie.