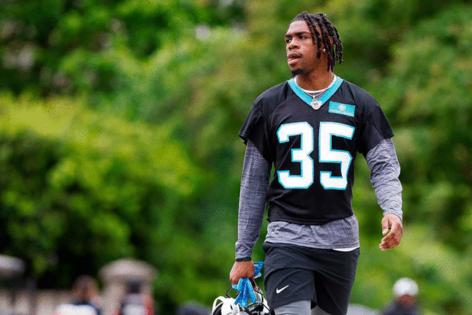 “I went back last night and looked at his (40-yard dash) video and it is crazy,” Panthers rookie linebacker Brandon Smith said after Day 2 of camp. “It is crazy because it’s just like a smooth gradual glide. And that’s exactly how I’ve seen him play for the past few days.”

Barnes caught evaluators’ attention by gliding through an NFL Combine-best 4.23-second 40-yard dash, the second-fastest time ever behind only former Bengals receiver John Ross’ 4.22 in 2017.

As a senior at Baylor, Barnes recorded 23 tackles, five pass deflections and an interception. His 21 catches allowed were the fewest of any Big 12 cornerback. Despite his blazing speed, Barnes remained undrafted entering the seventh round of the 2022 NFL draft until Carolina selected him at No. 242.

Panthers coach Matt Rhule originally recruited Barnes to Baylor and coached him for two years before coming to Carolina. Reunited with his college coach, Barnes has a chance to fulfill his NFL dreams by leaning on the same trait that got him this far: Speed.

More than a track guy

“My dad saw that I was real fast when I was younger,” Barnes said. “Because I was 5 years old playing up in the league. I played tackle (football) at 5 years old.”

Running faster than his competitors came naturally to Barnes. At its core, football is a simple game. Take the ball and do not get touched, your flag pulled or, in 5-year-old Barnes’ cases, tackled. Barnes understood and often outran everyone.

It was not until high school that Barnes recognized his world-class speed.

“I didn’t realize how fast I was until I got to high school when I started running track my junior year when I first broke the (school) record,” Barnes said. “So that’s how I realized how fast I was and obviously playing football. Like I was running past everybody.”