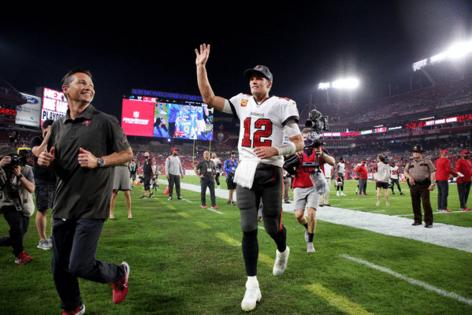 TAMPA, Fla. — Tom Brady has been asked about retirement more times than you can shake a walking stick at.

The 44-year-old typically smiles and says only that he knows his body won’t give out before he gives up football to spend more time with his family.

But as Sunday’s wild-card playoff game against the Eagles approaches, Bucs quarterbacks coach Clyde Christensen has considered that we may be witnessing the end of the greatest career in NFL history.

“I’m your typical fan,” Christensen said, “and I’ll be thinking, ‘Is this the last time we’re going to see him?’ ”

Going out on top

If it is the last time Brady laces up his cleats, whether he wins his eighth Super Bowl or not, he will be going out on top after enjoying arguably the best season of his celebrated 22-year career.

Brady won the NFL passing title this season. He threw for the most yards (a career-high 5,316) and touchdowns (43) while setting a league record for completions (485) on 719 attempts, second-most in a season in NFL history.

He did it despite losing three of his biggest targets in a 9-0 loss to the Saints on Dec. 19, when Chris Godwin suffered a season-ending torn anterior cruciate ligament and Mike Evans and Leonard Fournette left with hamstring injuries. A few weeks later, Antonio Brown was released after refusing to re-enter a game against the Jets.

The Bucs won a franchise-record 13 games, five fewer than the career-best 18-1 record (including three playoff games) Brady achieved with New England in 2007, when the Patriots lost to the Giants in Super Bowl 42.

Brady doesn’t get into comparisons. He’s competing only against his own legacy. But there’s no question he has altered your vision of great quarterback play forever.