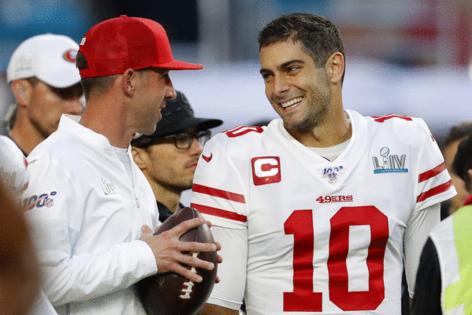 Jimmy Garoppolo says he has a good feeling about this 49ers team as they head into the playoffs.

You know what? I do too.

The Niners have their flaws, no doubt, and Garoppolo doesn't crack the top 10 of playoff quarterbacks this season, but the 49ers have multiple reasons to believe in themselves and their chances in the tournament.

For starters, this team is as healthy as could be expected at this juncture in the season, especially with left tackle Trent Williams (missed Week 18), safety Jaquiski Tartt (left Week 18), top running back Elijah Mitchell (battling knee injury), and a full complement of linebackers practicing on Thursday.

The Niners should even have their concussed punter, Mitch Wishnowsky back for their wild-card playoff game vs. the Cowboys Sunday.

This season has been a roller coaster for the 49ers and a huge part of that is the constant rotation of players. Credit to the front office and head coach Kyle Shanahan for building a deep team, but San Francisco will be close to the best version of itself going into the playoffs, and that team entered the season with legitimate Super Bowl hopes.

We can be honest about this: The 49ers don't deserve to be in the playoffs.

Not after the way they started their Week 18 win-or-go-home game with the Rams. Not after Garoppolo's fourth-quarter interception.