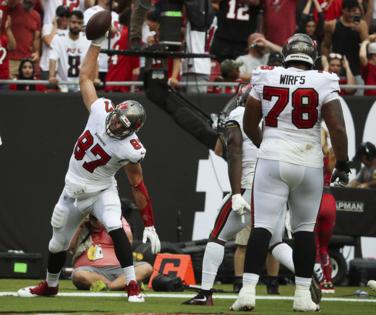 TAMPA, Fla. — Rob Gronkowski needed one more reception — his seventh of the game — to reach another $500,000 performance bonus in the fourth quarter of the Bucs’ 41-17 win over the Panthers last Sunday.

Having already earned a half-million dollars earlier in the game for a receiving yardage bonus, he saddled up to Mike Greenberg, the Bucs’ vice president of football administration on the sideline. Greenberg is in charge of the Bucs’ salary cap, so he’s the right guy to talk to about finances.

“If I don’t get the seventh catch,” Gronkowski said between swigs of Gatorade. “I have to go get a real job.”

Gronkowski got his bonus, and the Bucs have gotten more than their money’s worth with Gronkowski.

When the Pro Bowl tight end fractured several ribs and suffered a punctured lung in a Week 3 loss to the Rams Sept. 26 in Inglewood, Calif., it also took a little air out of the Bucs’ offense.

Gronkowski tried to come back about a month later but played only six snaps in a loss to the Saints before suffering back spasms. But since returning to the lineup, the Bucs are 7-1.

With injuries to wide receiver Chris Godwin and running back Leonard Fournette and the release of receiver Antonio Brown, no player has had a bigger impact or made more clutch plays for the Bucs than Gronkowski. In the past eight games, he had 39 catches for 618 yards and two touchdowns.

He’s also blocked well in the run game, an underrated aspect of Gronk’s skill set. Here’s another one. When things look dark, Gronkowski is a shining light on and off the field.

“Gronk is a freaking animal,” quarterbacks coach Clyde Christensen said. “He’s one of the great players I’ve ever been around. I’m not sure I’ve ever seen anybody play the position better than he plays it. He’s outstanding. And he’s a phenomenal locker room guy, too. Never a bad day. Never complains. Never asks for a ball. Keeps everyone loose and pleasant every day. Never has a bad day.”

Gronkowski also has a way of keeping things light on the sidelines and in the meeting rooms. His affability and earnestness make him incredibly popular among teammates and coaches. “It’s huge,” coach Bruce Arians said. “He just brings that different kind of energy, and he’s a clutch player so I think the guys feed off it, for sure.”

Considering that he looked as if he may be headed to injured reserve earlier in the year, Gronkowski’s remarkable season has had a second act.

“This year was definitely a successful year,” Gronkowski said. “Successful season for the team and for the organization getting 13 wins for the first time in this organization’s history. (As for) myself, it was just a successful season with making plays when my number was called, getting blocks down and helping out the running backs to make some yards.

“Overall, I would say it was a pretty good season from team-wise to my personal stance of my play. That doesn’t matter now (because) the regular season is done now, and we have to carry that into the playoffs.”

That’s where having Gronkowski will really pay off for the Bucs.