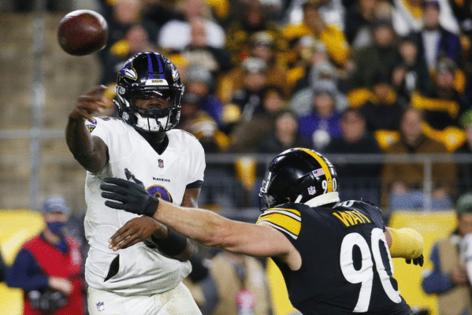 PITTSBURGH — T.J. Watt isn't sweating the sack record — at least not anymore. There was a glimmer of hope that his first-quarter takedown of Tyler Huntley would be changed from just a forced fumble to a full sack to give him full ownership of the single-season record, but Watt is putting that in the rearview, and 22 1/2 is where it will stay.

"All of that stuff is out of my control," Watt said Friday. "It is what it is. At this point, the regular season is closed and I'm on to the postseason."

But if you're talking most sacks in a single campaign, Watt can still leave his mark. When Michael Strahan set the record in 2001, he didn't add to his total in a wild-card loss to the 49ers. In fact, the other two players with 22 sacks since it became an official statistic in 1982 were Justin Houston and Jared Allen, and neither of their teams even played beyond Week 17.

So what Watt will focus on is not one more regular-season sack, but his first playoff sack. In two career postseason games, Watt has been held — sometimes literally — out of that column. It doesn't help that the Steelers got down 21-0 and 28-0 in those two wild-card defeats, minimizing Watt's chances to bear down on a quarterback looking for big plays through the air.

"It's pretty obvious that once an offense gets up by 14, 21 points, whatever it is, that they can pretty much do whatever they want to do," Watt said of the Steelers' slow starts in their last two playoff games. "Run the ball, drain the clock, all that stuff limits the opportunities for splash plays, which is what we, specifically, here in Pittsburgh strive for. It's difficult, but a lot of the times, it's on us for not stopping the offense."

Three weeks ago, when the Steelers played the Chiefs, it wasn't a playoff game, but it had the feel of one. Because the Steelers dug themselves an early hole — a big hole — and Watt didn't make much of an impact on the game.

It was the only game all season in which Watt wasn't credited with even one pressure, and the first time that happened since last year's first-round loss to the Browns. To be fair, he only played 38 snaps. That's the lowest number for Watt in a game he didn't leave early due to injury, and in Kansas City, that's only because he was already playing through one.

"I think it was a matter of how my body was feeling going into that game," said Watt, who's usually hesitant to make any excuses due to health. "I know I wasn't able to play as many snaps and be as effective as I wanted to be. I feel better where I am today than I was going into that game."

In his two postseason appearances, Watt has just two quarterback hits and one tackle for loss, despite playing at least 90% of the snaps in both. He was named a first-team All-Pro for the third season in a row Friday, and this time he was a unanimous pick, but playoff success still eludes him more than any quarterback can.

His defensive teammate Cam Heyward, the only Steeler who also earned first-team All-Pro honors this season, acknowledged that Watt's lack of production in Round 1 against the Chiefs isn't necessarily an indication that he can't get to Patrick Mahomes.

Simply put, when Watt plays more than 85% of the game on defense, the Steelers are 5-0. In those five victories, he had 11 sacks and 17 quarterback hits. Their only losses were games when Watt didn't play (twice); was returning from an injury (twice); or couldn't finish (three times).

So, yeah, Watt technically doesn't have a stat to his name in a playoff game. But these Steelers have been playing in do-or-die situations for weeks now, if not a month, and Watt has been coming through at every turn — except for one.

"It starts with getting off the field and not having the sustained drives they were able to have, specifically early in the game, the first time," Watt said.

"If you don't win, you go home. So we need to lock it in, almost hit the reset button, and put all your feelings aside, because nobody cares if you're tired. We need to win this game and that's what we're here to do. I'm willing to take anybody along with me because I am not ready to go home."