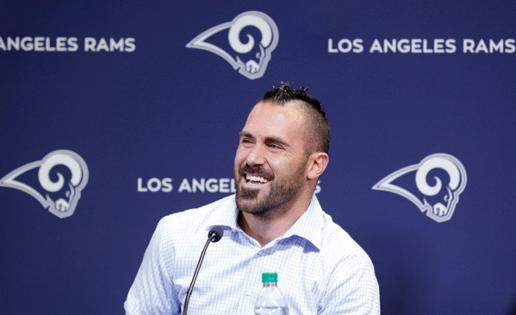 LOS ANGELES — The word "crazy" came up several times during a 46-minute video call in which Eric Weddle discussed his decision to come out of retirement and sign with the Rams this week. So did the words "surreal" and "mind-boggling."

At one point, Weddle was asked if it was "nuts" to think the 37-year-old safety, a full two years removed from his last NFL action, could go from coaching his son's 12-and-under youth football team and playing pick-up basketball to the SoFi Stadium field for Monday night's playoff opener against the Arizona Cardinals.

"Yes, yes," Weddle said of the head-spinning and life-altering series of events that began with a call from Rams defensive coordinator Raheem Morris on Sunday night. "I had a rush of emotions. You get that call and you're like, 'This isn't really going to happen.' You're kind of reserved.

"Then you realize it's serious, and you get excited, and you realize everything that entails — I'm leaving my family, my kids, the routine. And then it's kind of overwhelming. You have to take a step back and figure out, 'Can I do this? Is this realistic? Does it make sense? Can you do what they're asking you to do?' "

All legitimate questions, the answers of which will come Monday night and, if the Rams can get by the Kyler Murray-led Cardinals and advance in the NFC playoffs, over the next few weeks.

As great a story as it would be for a Poway father of four who has spent two years shuttling kids to and from football, basketball, volleyball and soccer practice — "Our afternoons consist of the Weddle Taxi Service," he said — to shore up the Rams' injury ravaged secondary, there is a fantasy-camp feel to his return.

No matter how good a shape Weddle is in, no matter how excited he is to join the team he last played for in 2019, it would be unrealistic to think he could join the Rams four months into the season and have a considerable impact on a defense that lost safety Jordan Fuller (ankle) and might be without safety Tyler Rapp (concussion).

But the Rams aren't expecting Weddle to regain the form that made him a two-time All-Pro and six-time Pro Bowl selection.

With reserve safeties Nick Scott and Terrell Burgess expected to move into starting roles, the hope is that Weddle provides better play than the team's other options in the secondary. And if the Rams advance, Weddle could have more of an impact as he learns the nuances and concepts of a new defensive scheme.

"I know how much time and effort goes into a season, but I'm close enough to where I can help out for one game, for all the marbles, for 10-15-20 snaps," Weddle said. "I can do that. If I didn't feel like I could go out there and be what I expect to be, then I wouldn't be sitting here right now."