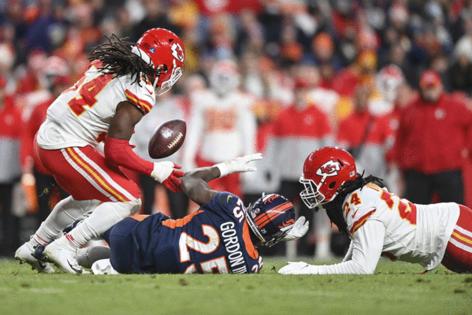 KANSAS CITY, Mo. — When the Chiefs were trudging along at 4-4 entering their game against Green Bay, we were struck by the question of how much their funk was about inexplicably plummeting into a crummy team and how much was about twists of fortune.

Or maybe it was somewhere in between — considering the uncharacteristic blooper reel of blunders such as the one at Baltimore in the form of the first lost fumble of Clyde Edwards-Helaire's career that might as easily have been recovered by a Chief.

The scenario reminded me of something I was told last season by my longtime friend Rich Keefe, the former director of sports psychology at Duke University and author of a book on the psychology of peak athletic performance called "On The Sweet Spot: Stalking The Effortless Present."

With the Chiefs seeking their second straight Super Bowl berth, we spoke about the psychology of trying to repeat. The conversation led to him making this point:

"When the absolute winner is declared, they're there on the basis of being really good plus chance events. So that means the next year they could be just as good and not have those chance events work out on a couple things and then they fall back.

"So it's not really that they weren't as good; they just didn't have the things going for them that they need to win."

That seemed to apply as the Chiefs stood at a clear crossroads even a week after a weak 20-17 win over the wretched Giants (4-13).

So we wondered if their luck, and perhaps thus their direction, might be turning since the Packers would be playing without star quarterback Aaron Rodgers after he tested positive for COVID-19.

Indeed, the Chiefs won 13-7, making for their first "winning streak" of the season ... on the way to winning nine of their last 10 entering their AFC wild-card round game against the Steelers (9-7-1) on Sunday night at Arrowhead Stadium.

The Chiefs may or may not have beaten the Packers with Rodgers, but no doubt his absence was part of how they won that day.