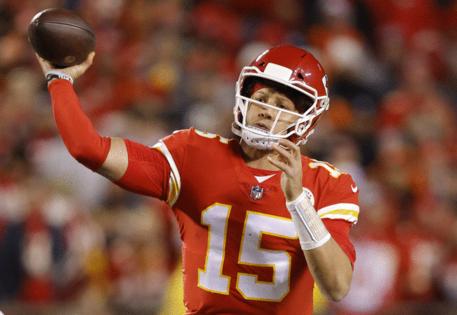 Oh, that previous team? It was the Patrick Mahomes-led Chiefs offense, too. One blip, then they started it all over again.

You know things have changed, but that's just how significantly things have changed. The Chiefs have reached that mark — 23 points — only once in their past five games. From turnovers to drops to penalties to adjusting to deep-shell defenses, the issues have been dissected in this space — and they'll continue to be through as long as they remain relevant.

But the struggles have actually overshadowed one area of marked improvement. One feature on which Mahomes spent more time than any other this season.

"I think I've done a great job of getting a better and better feel for the offensive line," Mahomes said. "Those guys are blocking their tail off and doing a great job there."

At some point during every season, Mahomes says, he has to remind himself the primary objective is to stay within the pocket, go through his reads and throw the ball. A scramble is a last resort, not a first look.

Remember that 27-3 loss to Tennessee in October? It placed his pocket instincts under the magnifying glass once more.

"I mean there were times I could've stepped (up), found a soft spot in the pocket," Mahomes said then. "Where (instead) I got out of there and tried to make something happen. It's stuff I've worked one every single year."

As the offense has been unable to replicate the successes of the past three seasons, don't blame the pocket awareness. Not any longer.

Mahomes spent training camp having individual conversations with an offensive line comprised of five new starters. Orlando Brown, the left tackle, wanted to get an idea for where Mahomes preferred to stand in the pocket. The inverse is true as well — Mahomes wanted to know if his positioning could ease Brown's job.

The Chiefs would rather Mahomes throw the ball quickly than depart the pocket looking for miracles that are less likely to present themselves against deep cover-2 schemes. On Sunday against Denver, his passes traveled an average distance of just 5.2 yards in the air, per Next Gen Stats. The formula might work (as it did on the opening drive) if the Chiefs are able to eliminate the other mistakes.

"It's kind of the give and take," Mahomes said. "You want to stay in the pocket and take the throws, but whenever there are chances to make the big plays happen, you try to go out and do that as well."

It's a delicate balance, basically, but he thinks he's found the right balance. And the examples of him escaping clean pockets, while not eliminated, are becoming fewer in total.

He's still willing when necessary. He ran for the opening touchdown Sunday against Denver — but even in that situation, he initially dropped back in the pocket, then tried to step up, and finally decided to elude pressure to his right. Did all he could to make that his final option.

"Teams are doing a pretty good job of when they rush, they kind of stay in certain lanes," Mahomes said. "They don't get over-aggressive and let me scramble out. And our offensive line is doing such a great job of blocking that I usually have time in the pocket to maneuver."