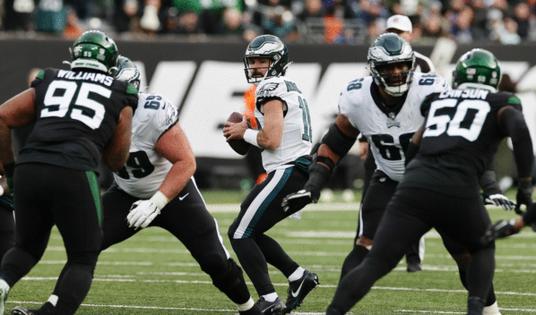 A loss to one of football's worst franchises would have left a festering sore as the inconsistent Eagles entered their late-season bye week, but, incredibly, nobody really wanted to talk about that. Such is the magnitude of Gardner Minshew's magnetism.

So manic was Minshew Mania, that, in the minutes after the Eagles beat the Jets, coach Nick Sirianni was not asked a single question about the biggest win of the season.

"Yeah, right?" Sirianni said outside of the interview room at MetLife Stadium. He'd spent nine minutes navigating questions about how Minshew had played better than Jalen Hurts ever has, and he was eager to address the bigger picture: "You never want to sit for two weeks on a loss."

The Birds, behind Minshew's virtuosic performance, had avoided catastrophe. In the same stadium, a week after an upset loss to the woeful Giants, they'd weathered an offensive blitzkrieg from the pathetic Jets, who scored touchdowns on their first three possessions but still lost, 33-18.

"Let's come back and get ready to run this table," safety Rodney McLeod told the team in the locker room. "We know what's in front of us. All division opponents. Everything we set out for, man, is right in front of us."

Thanks to the win, entering their bye week the Eagles stand at 6-7, not 5-8. They're a half-game behind the 49ers and Washington, both of whom are 6-6 and have had their byes. The Eagles hold their own future firmly in their hands.

They host Washington, the Giants, then travel to Washington, before finishing with a visit from the Cowboys. As such, a 9-8 record is attainable, and 10-7, and an almost certain playoff spot, is possible.

Sirianni said he'd return to the man who started the first 12 games as soon as Hurts' ankle heals, for better or worse. But a loss to the Jets would have made immaterial whether Sirianni started Hurts or, more logically, the Mississippi Mustache.

The win "was huge for us, especially after last week, the way we felt leaving this building," right tackle Lane Johnson said.