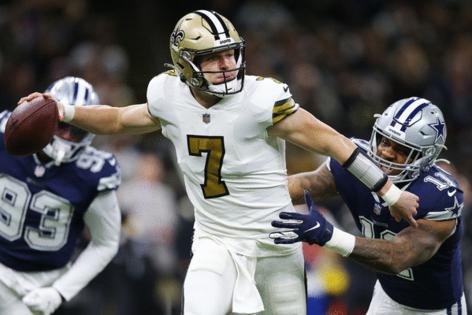 Here's my best bets off the waiver wire for Week 14:

— QB Taysom Hill, Saints (ESPN: 36%; Yahoo: 34%): I wrote here last week Hill had top-10 upside. He threw four interceptions, completed 46 percent of his 41 pass attempts and played most of the game with a torn tendon in his middle finger against the Cowboys ... and ended up QB4. Only Kyler Murray, Tom Brady and Justin Herbert produced more for their fantasy investors.

— RB Dontrell Hilliard, Titans (ESPN: 36%; Yahoo: 41%): Hilliard has thrived with an average of 14 touches the last two games. He's produced 215 total yards and a touchdown with nine receptions. Both he and D'Onta Foreman (ESPN: 34%; Yahoo: 41%) deserve to be rostered — Foreman finished with 109 rushing yards against the Patriots — and are widely available thanks to a bye in Week 13. It remains to be seen how Jeremy McNichols (ESPN: 11%; Yahoo: 11%) will factor in once he's healthy.

— WR Van Jefferson, Rams (ESPN: 64%; Yahoo: 68%): Jefferson should be universally rostered. He's WR22 in standard leagues (WR26 in PPR) since Robert Woods was lost for the season. Like Woods, he's operating out of the slot mostly and has received at least seven targets in four straight games.

— BONUS: RB Sony Michel, Rams (ESPN: 61%; Yahoo: 68%): Michel looked like a bell-cow ball-carrier against the Jaguars with Darrell Henderson Jr. active. Henderson is still dealing with a thigh injury and isn't known as a quick healer, but there's a chance Michel will see a bigger volume going forward regardless of Henderson's health and he's still available in around a third of leagues.