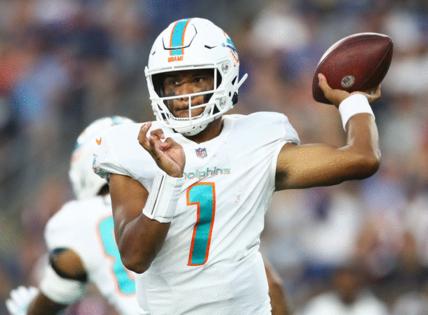 To assess that, we compared Tagovailoa’s statistics in his initial 16 NFL starts (excluding the two games when he played off the bench) with the first 16 starts — not appearances, but starts — of the other 19 quarterbacks that could reasonably be ranked among the NFL’s top 20 non-rookie QBs.

(See the first category below — passer rating — for the full list of the 20 we evaluated.)

And Tagovailoa stacked up favorably in several key statistical measures, including top 10 in three of them.

Tagovailoa’s 89.7 rating in his 16 starts would rank him 10th on the list of arguably the game’s 20 best active quarterbacks.

If Tagovailoa’s two games off the bench — garbage time against the Jets last season and last month’s game against Baltimore — were included, his passer rating would be 90.5 for his career, which would still rank 10th on this list.