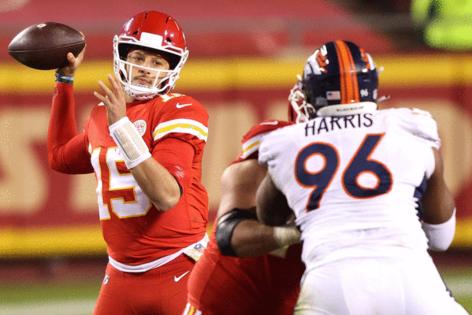 "We don't need no victory lap on to the next," he wrote, punctuated with a flexed-biceps emoji.

If his declaration was a bit of a provocative dig at the Raiders for that victory lap they took by bus around Arrowhead Stadium after a rare recent win there last season, it also served as an astute act-like-you've-been-there before statement based entirely in a fundamental fact of the Andy Reid era.

Beyond that the Chiefs are 14-3 against the Raiders since Reid arrived in 2013, they've won 34 of their last 40 games against AFC West opponents entering Sunday's visit from Denver — which has lost 11 times in a row to the Chiefs.

Not that you'd know that from anything the Chiefs (7-4) might say as they prepare to take on the Broncos (6-5) in the first of three straight divisional games, games that will go a long way toward determining both the trajectory of the Chiefs' postseason hopes and further reveal what this team is about as it seeks to extend a four-game winning streak after a tepid 3-4 start to the season.

Never mind that of late the AFC West has been something of a chew toy inside a pinata for the Chiefs, who have seized the last five division titles — furnishing the mortar of the last three AFC Championships, back to back Super Bowls and their first championship in 50 years.

When Reid on Wednesday was asked about the dominant streak over the Broncos, he deadpanned, "I'm not even sure what you're talking about. But we can't think about all that. We're in this whole thing where we're trying to just get good enough to go play these guys. So that's where we're at."

Indeed, while the prologue might give the Chiefs some swagger and their fans a certain reassurance and even lurk in the heads of their divisional adversaries, it's also entirely true that this game will be won or lost on its own independent dynamics.

"We understand it's a whole brand-new football team on both sides of the ball," said quarterback Patrick Mahomes, perhaps suppressing some inner flexing himself but nonetheless accurately adding, "It's a division opponent. It's always a big game against the Broncos, and we know it's going to be a great challenge for us ...

"We need to go out there and play our best football."