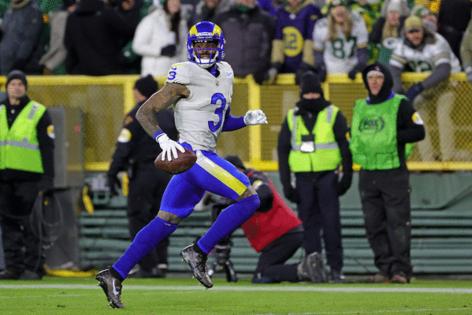 LOS ANGELES — Now that the first one is out of the way, Odell Beckham Jr. is ready for more.

Beckham caught a long touchdown pass from Matthew Stafford in the Los Angeles Rams’ defeat last Sunday at Green Bay. It was the star receiver’s first touchdown for the Rams — and his first since suffering a major knee injury while playing for the Cleveland Browns in October 2020.

“You see the smile,” Beckham said Friday when asked about the 54-yard scoring play. “Just kind of starting to find your rhythm and balance and be comfortable within this offense.”

Beckham, who signed with the Rams last month, is expected to play an increasingly larger role for a team that will try to end a three-game losing streak Sunday against the Jacksonville Jaguars at SoFi Stadium.

Beckham suffered a hip injury during the 36-28 loss to the Packers and was limited in practice this week. Beckham will be listed as questionable for Sunday but is expected to play.

When the Rams agreed to terms with Beckham on Nov. 11, the three-time Pro Bowl selection was regarded as a luxury for coach Sean McVay — a high-profile complement to receivers Cooper Kupp, Robert Woods and Van Jefferson. But later that day, the Rams discovered Woods had suffered a season-ending knee injury during practice.

Suddenly, Beckham was thrust into a starting role. With one day of preparation, he played 15 snaps and caught two passes for 18 yards in a 31-10 loss to the San Francisco 49ers.

An open date followed the defeat, so Beckham spent the next two weeks learning parts of the offense and preparing for a return to Green Bay, where in 2016 he dropped several passes in a playoff loss while playing for the New York Giants.

Beckham said before the game that he wanted to create better memories at Lambeau Field, the scene of one of the worst games of his career.