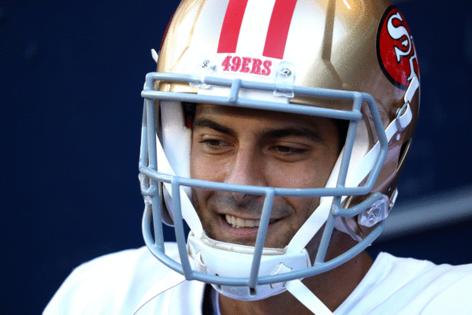 Now, the Niners want the rest of the NFL to believe Garoppolo can return to the starting job in 2022, because they want to trade him and such a stance gives Kyle Shanahan and Co. some leverage in a deal where they have next to none.

It's all artificial. The Niners' starting quarterback in 2022 will be Trey Lance. Garoppolo remains a lame duck for this team.

But here's the funny thing about this lame-duck season for Garoppolo: It's going pretty well.

If San Francisco wants this season to be one to remember, though, Garoppolo will need to be better in the coming weeks.

In fact, the Niners will need him to do something he hasn't done since 2019: put the team on his back and carry them to a win, as he did that outstanding season in games at New Orleans, Arizona, and Seattle.

If Garoppolo can do that just a couple of times, the Niners will make the playoffs without any stress and they might have some leverage in trade negotiations this offseason.

If Garoppolo cannot, the final third of this 2021 season is going to be a continuation of this season's roller coaster.

There's a paradox to the way the Niners have been playing as of late.