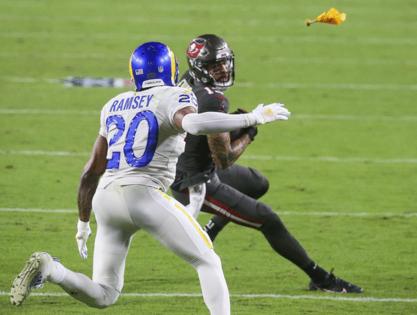 LOS ANGELES — He was selected fifth in the 2016 NFL draft and played three-plus seasons with the Jacksonville Jaguars.

But Los Angeles Rams star cornerback Jalen Ramsey said Thursday that it would be just another game when the Rams play his former team Sunday at SoFi Stadium.

Ramsey, 27, earned three Pro Bowl selections with the Jaguars. But his time with the team also was marked by his arrival to 2019 training camp in a vehicle that resembled a bank truck, an on-field argument with former coach Doug Marrone and, reportedly, a request to be traded.

In October 2019, the Rams sent two first-round picks and a fourth-round pick to the Jaguars in exchange for Ramsey. Eleven months later, they gave him a five-year extension that included $71.2 million in guarantees and could be worth as much as $105 million.

“I’m genuinely grateful for my time there and that whole experience,” Ramsey said of Jacksonville after practice. “Like, it was a part of my life that I needed, that I appreciated, and I went through things there that make me a better man today, make me appreciate the situation I’m in today even more.

Since Ramsey’s arrival in Los Angeles, Rams coaches and teammates have spoken often about his leadership and maturity.

Defensive coordinator Raheem Morris said he did not expect Ramsey’s demeanor to be different Sunday when he plays against his former team for the first time.

“His maturity level has taken off to a whole different level when it comes to those type of things,” Morris said. “Before, I think he … felt like he had to garnish attention at times. ...

“I think he wants people to stop looking at him, and now challenge him more so he can make some more plays and be more part of the game as much as he possibly can. So, I think he just views the game a little bit differently now.”