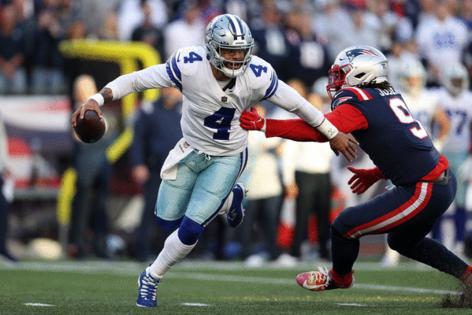 Two NFC teams wounded by current slumps — Dallas has lost two in a row and three of past four and N’Awlins four games in a row — kick off Week 13. Both played on Thanksgiving so the field should be level on rest. The Cowboys will be without head coach Mike McCarthy after his positive COVID-19 test, but their usually potent offense should be closer to its old self with top WRs Amari Cooper (off the COVID-19 list) and CeeDee Lamb (after a concussion) both expected to play. That’s a huge boost for Dak Prescott and for a still-hobbled Ezekiel Elliott. Saints could be getting an offensive infusion, too, though. Star RB Alvin Kamara as of Wednesday remained questionable but seemed closer to returning after three games out, and backup Mark Ingram should be back. Cajuns also seem ready to turn to Taysom Hill at QB, with Trevor Siemian 0-4 since replacing injured Jameis Winston. Hill could provide a needed spark, but a fast start might be key, as Saints have zero first-quarter points in their four-game skid. I like the Boys outright with Dak’s full deck of weapons, but Saints are on an 8-2-1 run covering as home underdogs and, getting 4 1/2 here, that trend feels right again this time.