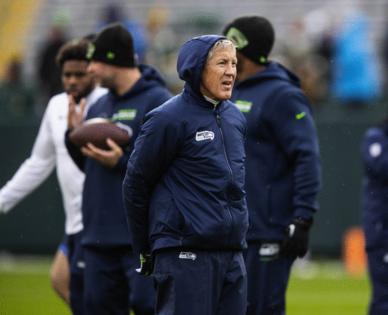 SEATTLE — The Seahawks have a new existential dilemma.

It’s no longer, “Can the season be saved?” That one has been asked and answered. Monday night’s 17-15 loss to the Washington Football Team turns the faint, lingering question mark into a definitive exclamation point at the end of the word “no.”

The math doesn’t work out, no matter how much of a Carrollian positive twist you put on it. They are 3-8, trailing everyone in the NFC except the Detroit Lions — who haven’t won a game. Crunch the numbers, apply the FiveThirtyEight.com formula, and you’re left with a 1% chance to make the playoffs. Not even Lloyd Christmas thinks there’s a chance.

The more relevant question now is, “Can the whole program be saved?” (The use of the collegiate term “program” is intentional, because it’s the one always favored by coach Pete Carroll, long after he left USC, to describe the well-oiled regime he put together in Seattle.)

But now, after a decade of steady success — eight of the past nine years with double-digit wins and playoff appearances — the operation is creaking. And this goes well beyond the postseason frustration of recent years, which has seen the Seahawks fail to make it beyond the divisional round since their excruciating Super Bowl loss to the Patriots.

In fact, you can make the case that the Seahawks never quite recovered from the emotional blow of that shocking defeat. But that’s another story for another time. The issue on the table to ponder now is whether the Seahawks are headed toward major changes in the power troika of Carroll/Russell Wilson/John Schneider — the group that led them to the promised land in the first place.

It’s certainly possible to look at this as a one-year aberration fueled by injuries and bad luck, and not something to overreact to. Those taking this stance — none of whom are anywhere to be found on social media and various comment sections, where the sky isn’t just falling, it’s already crashed and burned — can point to Seattle’s four losses by a grand total of nine points. They can say that with a few more breaks, or a little better health, the Seahawks would be right where they always have been, pushing for the playoffs.

But that belies the famous Bill Parcells mantra that you are what your record says you are. It also minimizes some disturbing signs that indicate there is trouble in paradise.

Certainly, the future of Wilson in Seattle will be the front-and-center issue entering the offseason. His frustration emerged after last season’s first-round playoff ouster, and it caused the Seahawks to at least explore the possibility of a trade. It’s hard to imagine he’s not equally frustrated now with the direction this season has gone.

With less of a financial burden (but still substantial) attached to a trade of Wilson following 2021, it’s bound to re-emerge as a topic — particularly with the massive struggles of the Seahawks offense in general, and Wilson in particular. It’s impossible not to watch Wilson make more poor decisions and inaccurate passes over these past three games than we’ve seen in his career and wonder what’s going on. Is it merely a byproduct of the finger injury that knocked him out for three games, or at age 33 (as of yesterday) has he lost some of the magic that made him such a brilliant quarterback? Certainly, his confidence and command seems to be waning.

The Seahawks could accelerate a rebuild by trading Wilson, who despite his struggles would no doubt have a strong market for his services. There’s always a subset of NFL teams in search of a quarterback savior, and Wilson’s track record is recent enough to entice teams to think that a change of scenery is all he needs to regain his place among the elite. Teams that would be willing to give up a haul of high draft picks to make it happen. There were certainly flashes of brilliance by Wilson on Monday, including the needle-threading touchdown pass to Gerald Everett and the 96-yard scoring drive at the end of the game.

Wilson has a no-trade clause, of course, but he may well conclude that a change of scenery is necessary and again advocate for a trade. That in turn would leave two questions, the first of which is how would the Seahawks fill the quarterback position if Wilson departs? It has been well proven that it’s not a simple matter of plugging in a new guy. Some teams (hello, Bears) have been plugging guys in for years, if not decades, to no avail. Wilson has provided the comfort of quarterback security for a decade, and that’s not easy to give up, no matter how much he’s struggling now.

The other question is whether Carroll, at age 70, would be willing to endure the growing pains that would come with a quarterback change. The fact that the Seahawks under Schneider have drafted poorly in recent years has led to a diminishing of talent that is playing into their current struggles. And their draft capital was severely diminished by the trade for safety Jamal Adams, which has not brought the intended championship run. It could turn out that 3-8 is not an aberration at all, but the start of a downturn.

Of course, there’s the larger question of whether Carroll’s guiding philosophies are still relevant without a world-class defense and a transcendent runner like Marshawn Lynch to back them up. And whether Carroll is willing to adjust them accordingly. In other words, whether he’s still the right man for the job he has done so well over that same decade.

It’s a lot of weighty stuff to ponder. Much of it has been pushed to the side while the Seahawks tried to resurrect their season. With that effort having failed, those issues are soon going to be front and center.