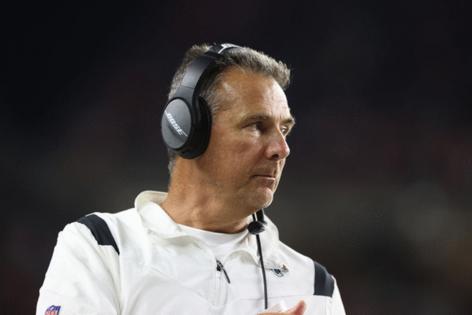 On a conference call with the Los Angeles Rams media Tuesday afternoon, Meyer said he is not a candidate for the vacant Notre Dame head coaching job or any other college job because he remains committed to the Jaguars.

''I'm not a candidate,'' Meyer said on the conference call. ''Obviously I spent six years of my life there, so great respect for Notre Dame, and as I do USC, UCLA, like we talked about. But I'm committed to the Jaguars and doing the best we can to turn this thing around.''

Meyer was one of the most successful coaches in college football history, winning three national championships in 17 seasons. In September, he refuted published reports that he may have an interest in the then vacant Southern Cal job that was filled Sunday when the school announced it hired Lincoln Riley away from the University of Oklahoma.

At Notre Dame, Meyer served as a wide receivers coach from 1996-2000 before landing his first college head coach job at Bowling Green in 2001-02. He was hired by Utah in 2003 and spent two seasons at the school before landing the Florida job.

Meyer has not enjoyed the same success during his first season as an NFL coach as he did coaching on the college level, where he never had a losing season.

At 2-9, the Jaguars clinched their 10th losing season in 11 years after Sunday's 21-14 loss to the Atlanta Falcons at TIAA Bank Field. Under Meyer, the Jaguars are still figuring out how to best utilize 2021 No. 1 overall Trevor Lawrence to maximize his strengths as a passer and runner with an up-tempo scheme and more read-option plays installed.

However, Meyer's most significant challenge this season didn't occur on the field, it was what happened in a Cincinnati bar in October. Two videos that went viral, one showing Meyer sitting in a chair while a woman who is not his wife was seen dancing up to him.

In a second video, Meyer is seen sitting on a bar stool behind a woman who is standing in front of him, and he appears to touch her backside with his right hand. At no point, Meyer said, did he think about resigning. The franchise, however, issued a statement from owner Shad Khan who called his head coach's conduct inexcusable and added that he must regain back their trust and respect.

Meyer apologized several times publicly for his actions and there have not been any recurring incidents since the videos were initially posted on social media.

After a stunning 9-6 upset victory over the Buffalo Bills in Week 9, Meyer and the Jaguars have lost three straight and their next two games are on the road against the playoff contending Los Angeles Rams (7-4) and the Tennessee Titans (8-4).