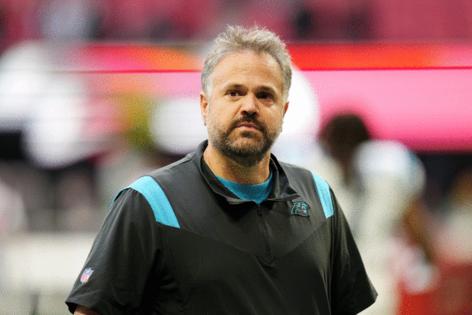 That’s according to multiple sports analysts and websites tasked with compiling lists of coaches to consider in filling recent head coaching vacancies in the college football landscape.

With Brian Kelly leaving Notre Dame for LSU and Lincoln Riley out at Oklahoma for Southern Cal, two major head coaching positions opened up in the last 48 hours. The Carolina Panthers coach has been linked to both openings on multiple lists.

Other coaching positions, such as at Duke and Rhule’s former Temple program, also remain open.

Rhule was named in a list of potential candidates for the Notre Dame job by NBC Sports. He was also listed as an option for the LSU role by CBS Sports before that position was filled. He’s on a similar list by Sports Illustrated that also named him as a possible candidate for the Oklahoma job.

“The guy who rebuilt Temple and Baylor into big winners is nearing the end of his second season with the Carolina Panthers with a career NFL record of 10-18,” Sports Illustrated reporter Ross Dellenger wrote. “There are two big questions here: (1) would he return to college and (2) would he leave in-season to do it? Rhule, 46, is held in high esteem by many athletic directors and coaches at the college level and some wonder if he’d like to return.”

The Panthers sit in last place in the NFC South with a 5-7 record. Last year, Rhule led the Panthers to a 5-11 record and third-place finish in the division.

Rhule has held three head coaching positions, two of which were in college football at Baylor (2017-19) and Temple (2013-16). He was named the Panthers head coach in January 2020, signing a seven-year, $60 million contract.

Rhule’s NFL coaching experience is relatively limited. He was the assistant offensive line coach for the New York Giants in 2012 before rejoining the league with the Panthers.

For about 50 minutes inside Arrowhead Stadium late Sunday, the Chiefs resembled the franchise that put its fans through 25 years of frustration and heartbreak here. Like the teams that spent regular seasons offering hope, ...Read More

Jan. 17—There are many layers to strip and examine from the season that ended quickly but not surprisingly for the Steelers, though the most difficult aspect going forward will be determining if their findings are ...Read More