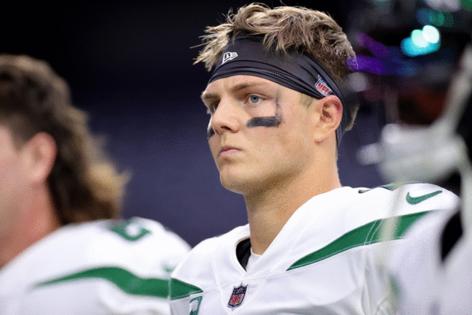 But the coaching staff stepped up and Wilson allowed him to manage the game as the Jets snagged their first road win of the season over the Texans in Week 12.

While there was some disappointment from the fan base on Wilson’s outing, Robert Saleh was pleased with the performance of his rookie.

“Was it his best game? No. Did he do a lot of things? Did he get comfortable as the game went on? Absolutely,” Saleh said. “He orchestrated two 13-play drives that led the scores where we were able to lap them. Scored before the half, scored after the half and another eight-plus-play drive. So, he orchestrated three pretty long drives and did enough to win the football game and that’s what’s most important.”

Wilson wasn’t happy with his performance, but Saleh looked at those emotions as a positive because of his quarterback eagerness to improve.

“I love that he’s hard on himself,” Saleh said. “His desire to get better is up there with anybody. I mean, he works his tail off at it.”

Saleh added that when Wilson struggles, it isn’t all on the rookie.

“But at the same time, coaches also, we’re hard on ourselves, too. It’s our job to help him get better and do everything we can for him,” Saleh said.

And to the coaching staff’s credit, they helped Wilson in the second half. Jets offensive coordinator Mike LaFleur realized the flow of the game and took the pressure off of Wilson.

In the first half, the Jets were more balanced as they ran the ball 11 times for 49 yards and Wilson threw it 12 times as he completed six passes for 44 yards with an interception.