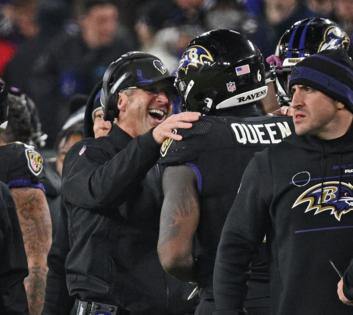 After watching the Ravens beat the Cleveland Browns, 16-10, on Sunday night, it’s clear they will make some progress in the final month of the season, but they likely aren’t going to get a lot better. They still might be able to make a strong run in the playoffs because, well, the NFL is a mediocre league.

Will the Ravens have enough? Probably not, but let’s see.

The Ravens are a team that has to win ugly. Injuries have caused a lot of problems, but there are also some that the coaching staff hasn’t figured out. So, the Ravens are going to have to fight, crawl, scratch, yell and scream for every win.

They can only win ugly, which is why they have only played one strong, complete game this season, beating the Los Angeles Chargers, 34-6, on Oct. 16.

But few other teams have been impressive. Some have gotten hot and then cooled off, like the Los Angeles Rams, Tennessee Titans and even the defending world champion Tampa Bay Buccaneers, but no team has played at a high level for an extended period of time.

At this point in the season, you can pretty much predict which teams will make the playoffs. The list in the AFC includes New England, Buffalo, Tennessee, Kansas City, Baltimore and Cincinnati. By that time, a lot of them will start jelling and playing well.

In the postseason, there are going to be hot quarterbacks, great receivers and strong defensive players, especially on the back end. There might be a team the caliber of Cleveland because there aren’t seven good teams in either the AFC or the NFC.

The hope was that the Ravens were going to get better, but there aren’t a lot of positive signs. Quarterback Lamar Jackson hasn’t played a complete game, especially as a passer, in nearly a month. He can make plays, but the Ravens’ best strategy is having Jackson drop back, run around, make defenders miss and then try to find an open receiver.

He has been bailing out on his receivers too quickly, even on short routes, and holding onto the ball too long. The offensive tackles struggle pass blocking and the Ravens don’t have a speedster in the backfield to break runs on the outside.

On defense, the biggest improvement has been with the linebackers. Josh Bynes gives the Ravens a presence in the middle and Patrick Queen has played well ever since he moved from the middle to the weak side nearly a month ago. Outside linebacker Tyus Bowser seems to have turned the corner to become more consistent, and the Ravens can get production on the other side with rookie Odafe Oweh splitting time with veteran Justin Houston.

The play in the secondary is horrendous. Against the Browns, the Ravens gave up passing plays of 38, 41 and 20 yards, and that doesn’t even count the four passes Cleveland receivers dropped. Even worse, Jackson threw four interceptions and the Ravens still won — he’s the first quarterback to do that since 2013. But that’s a sign of the times in a league where players can’t tackle properly and offensive linemen struggle run blocking.

That’s why the Ravens are intriguing. They have Jackson, the most explosive player in the game, and they always have a shot as long as he is healthy. But the Ravens win also because of the infrastructure they have in place.

They draft well, which is why they can lose a defensive end like Calais Campbell and replace him with Justin Madubuike or Broderick Washington. Both Oweh and Bowser were draft picks and so were Jackson, tight end Mark Andrews and receivers Rashod Bateman and Marquise Brown.

The Ravens lost both of their top running backs, J.K. Dobbins and Gus Edwards, in training camp to knee injuries but found serviceable replacements in Devonta Freeman and Latavius Murray. Coach John Harbaugh preaches teamwork and work ethic, which has been the base of his philosophy since he arrived in 2008.

That’s why the Ravens are interesting. Maybe 20 years ago they might not have been a good team in the NFL, but these days the league thrives on having average teams who can keep their fan bases interested for an entire season.

With the Ravens, they have that little extra that could put them near the top. That’s not a safe bet, but it will be interesting to see how far they can go. They win ugly, but most importantly, they win in an ugly league.