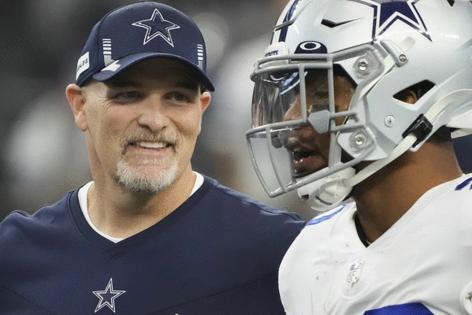 Coach Mike McCarthy knew the Dallas Cowboys were approaching crisis mode on the field, given that the team is dealing with consecutive losses for the first time this season, and off the field with a rash of coaches and players testing positive for COVID-19.

He admittedly tried to his best to get ahead of the situation by checking himself to a hotel near the practice facility in hopes of protecting himself and his family as well staying on top of his job.

McCarthy learned what the rest of the world has come to grips with over the last two years of the global pandemic — that there is not much you can do once there is an outbreak in your organization.

The Cowboys are in a full-fledged COVID-19 flareup with eight players and staffers currently under pandemic protocols with McCarthy becoming the latest Cowboys staffer to test positive.

McCarthy, who said he has a scratchy throat but no other symptoms, found out a 7:10 a.m. Monday and told his players in a team meeting shortly after. He stressed the importance of staying focused on the game and staying vigilant about the virus.

“This threat is very real ... please do everything you can to keep yourself and your family safe,” McCarthy said he told his team. “I moved into the hotel Friday just because I felt like it was among us at work, particularly on the coaching staff. So I told them, ‘Hey, if it can get me it can get anybody.’ I’d like to think that I was super cautious and careful. I just think it shows you the danger of the pandemic and the virus.”

McCarthy will not make the trip to New Orleans for Thursday’s game against the 5-6 Saints.

Defensive coordinator Dan Quinn, the head coach of the Atlanta Falcons from 2015-20, will serve as the interim coach in Thursday’s game. Statistically, the contest isn’t a must-win game, but with the Cowboys (7-4) having already lost three of their last four there’s no denying the club is doesn’t have the swagger they did a month ago.

McCarthy will be involved in meetings and game preparations on virtual basis for the rest of the week. The Cowboys will practice at The Star, but will do everything else virtually. The team is not allowed in weight room. Players will work out on their own this week, if at all.

McCarthy said having Quinn take over in his absence was a protocol the team had set before the season because of his past head coaching experience.