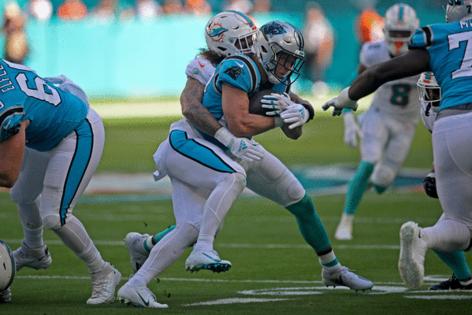 McCaffrey suffered an ankle injury in the first half of the Panthers’ game against the Dolphins and was seen leaving Hard Rock Stadium in a walking boot.

It’s unclear at what point he suffered the injury, but he played in only one snap in the second half.

“He rolled his ankle so he was trying to go in the second half, but was never quite able to come back to the same level,” Panthers coach Matt Rhule said Sunday.

Rhule said Monday morning that McCaffrey had an X-Ray on the ankle Sunday night, which came back negative, but wouldn’t know more until later.

An MRI on Monday revealed that the injury was severe enough to place him on IR. The injury will not require surgery, provided it heals properly, according to a source with knowledge of the injury.

McCaffrey’s final rushing attempt came with 4:26 left in the second quarter. He was stood up at the line of scrimmage and never went down. However, he was subbed out of the game and cameras caught him grimacing on the sideline.

McCaffrey’s injury is a major blow to the Panthers, whose season already hangs in the balance. They are 5-7 and have lost two consecutive games.

Seven NFC teams will make the playoffs this season. The Panthers are currently 11th in the standings and are one game behind the seventh-place team.

They suffered perhaps their worst loss Sunday to the Dolphins, 33-10, in a game where the offense wasn’t productive. The Panthers had 198 total yards.

GREEN BAY, Wis. — The snow flurries came in the second half of the San Francisco 49ers' playoff game at host Green Bay on Saturday. The temperature dropped. The fog of heavy breath poured out of players' face masks in ...Read More

PITTSBURGH —Can we agree quarterback is the most important position on a football team?

How about Ben Roethlisberger as the best quarterback in Steelers history?

That makes for a good debate, ...Read More

SAN JOSE, Calif. — The 49ers are, so far, conquering an unprecedented travel log to reach the Super Bowl.

At least this next stop is a short, familiar jaunt.

They'll be visiting the Los Angeles Rams for the NFC ...Read More