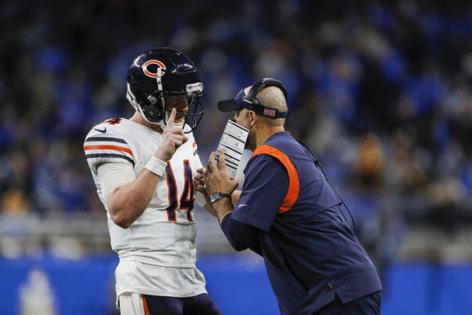 During a week of confusion and tumult, reports and rumors, the Chicago Bears needed something to lean on. Anything, really. Burdened by their five-game losing streak and then left to sift through the growing uncertainty regarding coach Matt Nagy’s job security, players and coaches had to push to retain their focus and the concentration of those around them.

Veteran quarterback Andy Dalton was happy to do his part. On Wednesday night, at Nagy’s behest, Dalton spoke to the team at their hotel as a way of helping to recenter the group. A day later, he threw for 317 yards, drilled a 17-yard second-quarter touchdown pass to tight end Jimmy Graham and led an 18-play, game-winning field-goal drive that allowed the Bears to edge the last-place Detroit Lions 16-14 on the final snap at Ford Field.

“I just spoke from the heart,” he said. “It’s what it all boils down to. I just felt like there was something in talking about what we needed in this moment.”

Added receiver Darnell Mooney on Dalton’s message: “Just go out there and get our swag back. Have fun. Just let everything loose. No stressing out, no tension or anything. It’s Thanksgiving for a reason. Give glory to God on Thanksgiving for the opportunity we had.”

To be perfectly clear, this wasn’t Jason Heyward in the weight room during the Game 7 rain delay in Cleveland in 2016. And it’s not as if Dalton’s pep talk sparked some sort of Disney-worthy performance from the Bears or even the quarterback himself.

Against a winless opponent that did just about everything to beat itself, the Bears barely had enough in their tank to survive. Dalton threw a pivotal interception in the end zone in the first half, finished with a passer rating of 85.1 and propelled the offense to only 16 points against a bottom-tier defense.

As a whole, the Bears remain mediocre at best heading into December with little momentum, growing injury issues and an upcoming schedule that likely will add to their mental exhaustion and damage-control efforts.

Yet they at least can take comfort in the idea that the players in the locker room remain united and driven and capable of minimizing any dysfunction. And that might help cushion this season’s crash. Hey, at this point, it’s something, right?

Dalton isn’t necessarily the most energetic or emotional fuel source in the locker room. He also doesn’t fully understand the scar tissue of a Bears fan base that has been perpetually frustrated since the start of 2019 and screaming for an overhaul for much of the last 30 years.