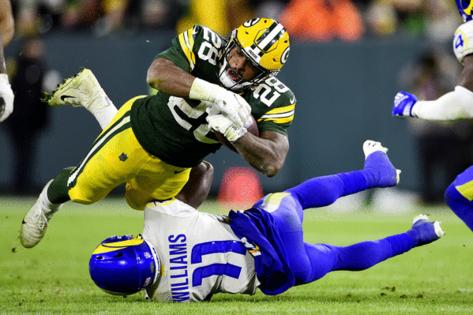 The Rams have lost three in a row, including Sunday's 36-28 humbling at Green Bay. The Chargers have dropped four of six, falling at Denver, 28-13.

Heading into the stretch run of the NFL regular season, these teams are stranded in the parking lot with no jumper cables.

There's time to recover, yes, but these days the local teams put the L and A in BLAH.

Begin with the quarterbacks. Two stars. Both pivotal to the rollicking starts of their teams, at one point even dueling most valuable player candidates, with Matthew Stafford's Rams bursting out of the gates at 7-1 and Justin Herbert's Chargers opening 4-1.

Both Stafford and Herbert watched in horror Sunday as their intercepted passes were returned for touchdowns. Stafford has been torched by a pick-six three games in a row. This season was supposed to be Stafford's escape from Detroit.

What the last three games have shown is Stafford isn't so much a surgeon with pinpoint precision on his short passes, but a tough guy with a tremendous arm who's at his best making those big throws over the top. At least two of his throws, while they weren't intercepted, tickled the fingertips of Green Bay defenders.

All that talk last week about the broken toe of Packers quarterback Aaron Rodgers, and yet in this game, the Rams were all thumbs. Two lost fumbles and an interception.

It's really hard to establish a passing game without the threat of being able to run. Hard as they tried, the Rams couldn't muster enough of a ground game against the Packers to jump start the play-action passing attack.