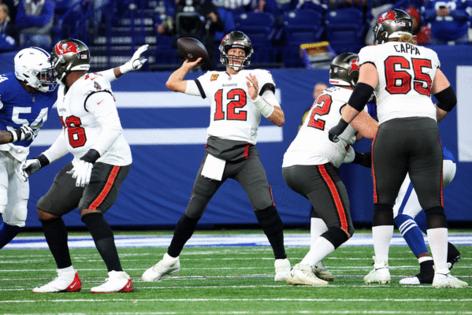 INDIANAPOLIS ― The Bucs looked like roadkill. They trailed the Colts by 10 points early in the second half and were retreating, on their way to another defeat as the visiting team.

They needed someone in a cape to save the day. Shaquil Barrett was the hero.

The Bucs outside linebacker sacked Indianapolis quarterback Carson Wentz, stripped the ball and recovered the fumble. It was one of five turnovers forced by Tampa Bay, which rallied to beat the Colts 38-31 on Sunday at Lucas Oil Stadium.

Barrett had two sacks, and after his fumble recovery the Bucs got an interception by Antoine Winfield Jr. and a muffed punt recovered by Scotty Miller.

The Bucs used the turnovers to score 20 second-half points, and Leonard Fournette added his fourth touchdown of the game on a 28-yard run with 20 seconds remaining. Fournette rushed for 100 yards and three scores on 17 carries and had a TD reception as well.

The Bucs made it interesting by allowing a 72-yard kickoff return by Isaiah Rodgers (Blake High product). But Pierre Desir intercepted Wentz’s final pass in the end zone.

When the Bucs play away from Raymond James Stadium this season, they struggle. New Orleans, Washington, Indianapolis — it’s all the same.

The only thing they can count on are penalties, turnovers and injuries, and all three plagued the Bucs in the first half Sunday.

Fournette tried to keep the Bucs in it with two first-half touchdowns, one receiving and one rushing. His second score cut the Colts’ lead to 17-14.