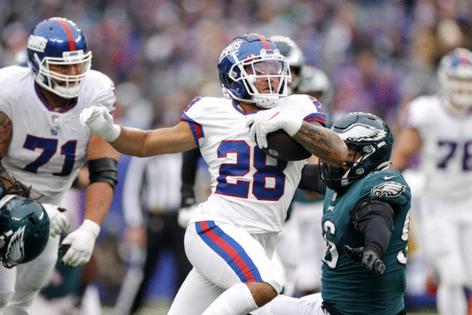 So he broke from his script to defend the team.

“You know, I gotta say this,” Strahan said, with co-owners John Mara and Steve Tisch sitting on the stage behind him. “Every team has their ups and downs, but the New York Giants have won Super Bowls. There are teams that [have] never had enough. Appreciate what you got. We will be back. We will be up again. I guarantee you that.”

The crowd cheered that, and they loved watching Joe Judge’s team justify Strahan’s confidence by hanging on to beat the rival Philadelphia Eagles, 13-7.

Tuesday’s firing of offensive coordinator Jason Garrett did not produce an immediate outburst of points with Freddie Kitchens calling plays on the headset.

And Philly wideout Jalen Reagor dropped two passes on the game’s final drive, including what might have been the game-winning touchdown on the Eagles’ final play in vain with 15 seconds to play.

And the Giants’ defense forced two Eagles turnovers on downs, one of which they turned into a 10-play, 59-yard touchdown drive in the third quarter.

Kitchens called plays for Jones to run early and emphasized getting the ball to playmakers in space.

GREEN BAY, Wis. — The snow flurries came in the second half of the San Francisco 49ers' playoff game at host Green Bay on Saturday. The temperature dropped. The fog of heavy breath poured out of players' face masks in ...Read More

PITTSBURGH —Can we agree quarterback is the most important position on a football team?

How about Ben Roethlisberger as the best quarterback in Steelers history?

That makes for a good debate, ...Read More

SAN JOSE, Calif. — The 49ers are, so far, conquering an unprecedented travel log to reach the Super Bowl.

At least this next stop is a short, familiar jaunt.

They'll be visiting the Los Angeles Rams for the NFC ...Read More