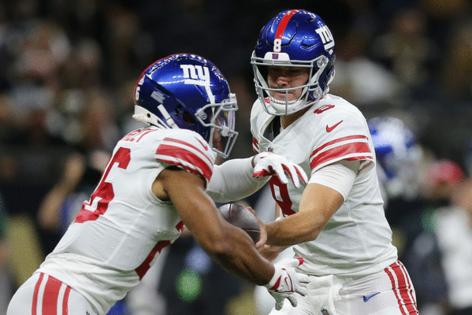 Patriots 25, Falcons 0: It was essentially a 50-50 split between Damien Harris and Rhamondre Stevenson. It’s highly possible this mirrors the situation in Denver between Melvin Gordon and Javonte Williams going forward.

Colts 41, Bills 15: Both Zack Moss and Devin Singletary are decent depth pieces, but the upside is limited despite playing in such a dynamic offense. Since Week 5, Moss is RB46 and Singletary is RB45 in standard leagues — RB45 and RB40 in PPR, respectively.

Ravens 16, Bears 13: Darnell Mooney was already a WR3/flex play before Allen Robinson hurt his hamstring — he’s been a top-30 option in all formats this season. He has WR2 upside with Robinson sidelined.

Browns 13, Lions 10: Josh Reynolds was claimed off waivers by Detroit a few weeks ago after securing his release from Tennessee because he never really received an opportunity despite all of the injuries. Reynolds made his debut against Cleveland and played the most snaps of any receiver while also running the most routes.

Texans 22, Titans 13: With AJ Brown banged up, Julio Jones on injured reserve and Marcus Johnson shut down for the season, it might be time to take a flier on Nick Westbrook-Ikhine. The second-year wide receiver has been productive whenever he’s been given the opportunity.

Dolphins 24, Jets 17: Since Week 8, Elijah Moore is WR1 in PPR and only second to Deebo Samuel in standard leagues.

Eagles 40, Saints 29: It wasn’t a surprise to see Miles Sanders return as the lead back once healthy, but it was interesting to see Jordan Howard still get 10 carries. Howard should have flex value in deeper standard formats in games where Philadelphia is the favorite.