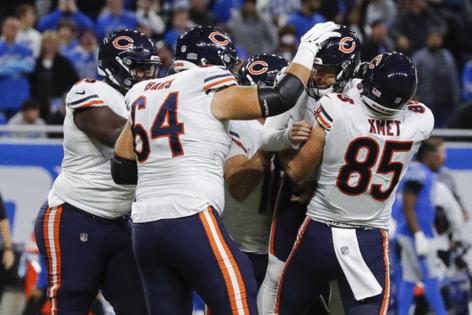 Cole Kmet had to turn off his phone this week.

Enough thoughts already were racing through the Chicago Bears tight end’s head as he tried to prepare for Thursday’s game against the Detroit Lions on a short week while also sifting through a blizzard of rumors about coach Matt Nagy’s job status.

He didn’t need to add questions from his friends and family to the mix, as much as the Chicago-area native might understand the craving for info about a bizarre week in Lake Forest.

“I’m not going to lie, it’s tough,” Kmet said of the Bears’ week. “You don’t know what’s true, what’s not. Then you see things that are true because you were there for them, and you wonder how those things get out.

“So there’s a lot of confusion in that sense. But at the end of the day, you’ve got to just block it out and go play football.”

Bears players focused well enough to eke out a 16-14 victory over the 0-10-1 Lions on Cairo Santos’ 28-yard field goal as time expired, prompting quarterback Andy Dalton to use the words “some relief” as the first way to describe the feeling in the Bears locker room after the game.

Bears players obviously were aware that a victory over a Lions team that hasn’t won since beating the Bears on Dec. 6, 2020, at Soldier Field wasn’t cause for a massive celebration. But after a weird few days wondering about Nagy’s job — not to mention a five-game losing streak — they had gratitude for the Thanksgiving win.

“You can slightly relax — I mean, not relax — but I guess you can enjoy the win before we get to next week,” outside linebacker Robert Quinn said. “So for the brief moment we’re going to enjoy it and Lord willing get back to our families safely and enjoy Thanksgiving, and I have I guess a better feeling with a win than versus a loss.”

Top Bears leaders were at least partially responsible for the distractions to the players after a Patch.com report Tuesday said the Bears were going to fire Nagy after the game against the Lions.

Nagy denied to the media he had been told he would be fired, as the report stated. But Bears Chairman George McCaskey and President and CEO Ted Phillips never issued a statement to refute the report, leaving speculation swirling.