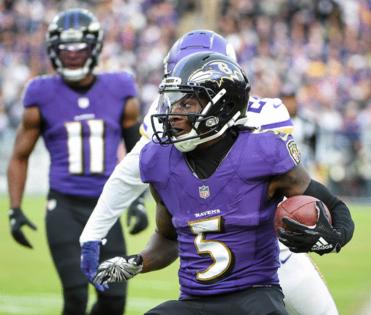 BALTIMORE — Shortly after this season is over, and if everyone still standing remains healthy, Ravens general manager Eric DeCosta will breathe a sigh of relief.

The Ravens finally have a good, young group of receivers and a potential No. 1 in rookie Rashod Bateman. That might not sound like a major accomplishment to some organizations, but it is in Baltimore.

The disappointments have been numerous, including first-round failures like Florida’s Travis Taylor in 2000, Oklahoma’s Mark Clayton five years later and Central Florida’s Breshad Perriman in 2015. At least Taylor and Clayton were from big-time programs, but UCF? Let’s just chalk that up to former Ravens general manager Ozzie Newsome having a bad day.

But that’s all in the past.

Bateman can play, as can second-year receivers Devin Duvernay and James Proche II. Marquise Brown is ascending midway through his third season and, combined with fourth-year tight end Mark Andrews, the Ravens haven’t had a passing game this complete since 1996 and 1997 when they had receivers Michael Jackson, Derrick Alexander and Jermaine Lewis.

“The whole passing game has gotten better, it’s fun to watch,” said Lewis, who played at the University of Maryland and still resides in the Baltimore area. ”It takes a while to adjust to the NFL game but in three years, if they stay together, they are going to be special.”

The Ravens have had some decent duos, like Clayton and Derrick Mason in the mid to late 2000s, and there was the dynamic pair of Anquan Boldin and Mason in 2010. Even though both were in the twilight of their careers, Boldin had 64 catches for 837 yards and seven touchdowns and Mason finished with 61 receptions, 802 yards and seven scores. Both averaged 13.1 yards per catch.

Alexander, Jackson and Lewis is the best trio yet. Lewis was only a rookie in 1996 when Jackson posted career numbers with 76 catches for 1,201 yards. He tied Tony Martin for the most receiving touchdowns that year with 14. Alexander was just starting to come into his own, catching 62 passes for 1,099 yards and averaging 17.7 yards a catch.

Jackson was 6-foot-4 and 195 pounds, Alexander was 6-2 and weighed 195, and both could fly. Once former Ravens coach Ted Marchibroda put Lewis in the slot in his second season, few teams matched up with the Ravens. In 1997, all three averaged more than 13 yards a catch.

“Of course, I am biased,” said Lewis, laughing about comparing the present group with his trio. “Michael Jackson was one of the best at route running. He could break down a big cornerback or a little cornerback. He was tough. [Alexander] was also a great route runner and could run that comeback. I was explosive up the middle, and if guys had to get their hands off me after 5 yards like they do today I would have been even more dangerous.”