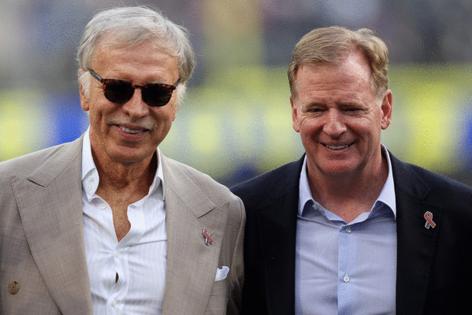 LOS ANGELES — The Rams and the NFL agreed Wednesday to pay $790 million to settle a lawsuit over the team’s departure from St. Louis, enabling Rams owner Stan Kroenke and the league to avoid the spectacle of a St. Louis trial next month, just before the Super Bowl at Kroenke’s showcase stadium in Inglewood.

Under the terms of the settlement, St. Louis gets the money no later than Christmas Eve, with Kroenke and the league left to decide how much of the payment should be allocated to the Rams and how much to the NFL and other owners.

The lawsuit, filed in 2017, alleged that the Rams’ move from St. Louis to Los Angeles violated the NFL’s relocation policy, under which the team and the league should have made every reasonable effort to keep the team in St. Louis. The settlement specifically says no party acknowledges any liability, a critical need for the NFL since Oakland has sued the league on similar grounds over the Raiders’ departure. Oakland lost, but an appeal is pending.

The Rams made no immediate comment Wednesday. The league said in a statement it appreciated “the effort by all parties to reach a settlement.”

In a joint statement, the mayor of the city of St. Louis and the executive of the county of St. Louis said the settlement “closes a long chapter for our region, securing hundreds of millions of dollars for our communities while avoiding the uncertainty of the trial and appellate process.” They said they were “still determining” what to do with the money.

The settlement does not include an expansion team for St. Louis. The settlement provides that 35% of the payment — $276.5 million — be awarded to the attorneys representing St. Louis.

The Rams argued that when St. Louis declined to make $700 million in improvements to the team’s stadium there, a lease provision was triggered that enabled the team to end the lease and leave town.

St. Louis argued that while the provision ended the lease, it did not absolve the Rams from negotiating with the city thereafter. The city said it had spent millions on proposals for a new stadium, secured a naming-rights sponsor and pursued hundreds of millions in public funding while the Rams already had decided to leave for L.A., even as team and league officials stated otherwise.

The NFL asked the St. Louis Circuit Court to throw out the lawsuit, to order private arbitration and to move any trial out of St. Louis. The court declined all three requests; the rulings were sustained on appeal.

The NFL appeared resigned to losing before a hometown jury but was confident it could be successful on appeal, at least in having the damages significantly reduced. St. Louis had sought damages in the range of $4 billion, including payment equivalent to the relocation fee the NFL assessed the Rams and the increase in franchise value resulting from the move to Los Angeles.