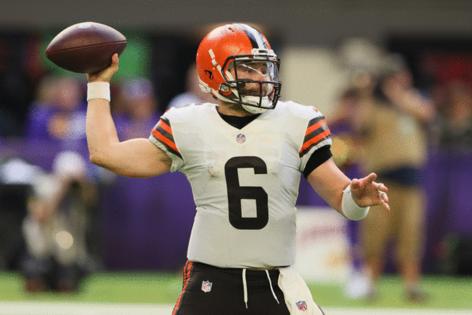 PITTSBURGH — The big news in Cleveland on Sunday was that Baker Mayfield failed to meet his mandatory media obligations after the Browns' dreary 13-10 win against the Detroit Lions. He walked off the field at FirstEnergy Stadium without celebrating with his teammates. Reports were he was angry about something, perhaps about being booed in the second half by the home crowd.

Mayfield's wife, Emily, did speak on Instagram on Sunday. She also was angry, perhaps about those same boos.

"No one better say anything bad about Baker Mayfield after this game," she posted. "I don't think I have seen toughness like this in a while. Maybe the rest of our team should take the heat and get tougher."

That should have played well in the Browns' locker room, don't you think?

The Instagram post quickly was taken down. Emily Mayfield tried to backtrack from her comments Monday, writing on Twitter she "loves the guys on this team. I respect every single one of them. I'm never HATING on them."

Seems sincere to me.

This wasn't anything new for Emily Mayfield.

"For all of you 'fans' who are blaming yesterday's loss solely on Baker, wake up," she posted after the Browns were beaten by the Los Angeles Chargers on Oct. 10. "He left it all on the field. ...

"You truly don't know what you have. I have watched him give his all and change the entire culture in CLE, yet he gets so little credit for it. He never asks for recognition and continues to carry the weight day in and day out, despite the hate. If you're a true fan, SUPPORT our guys, Baker, and everyone else. The hate does NOTHING for them."

The Seahawks did indeed suffer a big loss Sunday despite beating the 49ers 30-23, as safety Jamal Adams — who signed a four-year, $70 million extension in August, making him the highest-paid player at his position in NFL...Read More

Chicago Bears rookie quarterback Justin Fields has been medically cleared to return from his ribs injury and will start Sunday night against the Green Bay Packers at Lambeau Field.

It will be Fields’ first start since ...Read More

Justin Fields can’t return soon enough. As the Chicago Bears look to squeeze as much meaning as possible out of what’s left of their wayward season, the rookie quarterback’s continued development is at the top of the...Read More