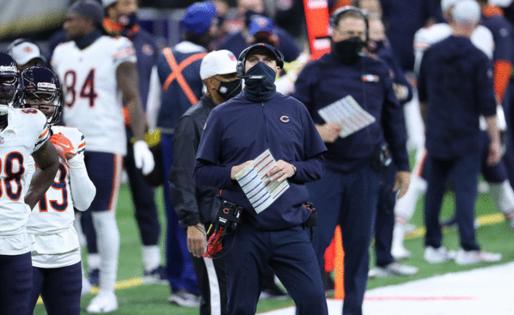 If Matt Nagy was not convincing when he spoke about his future with media Tuesday afternoon, he was less convincing with Chicago Bears players later in the day after the team wrapped up its second walk-through at the Walter Payton Center in Lake Forest.

The embattled coach said a Patch.com report that the Bears have told him he will be fired after Thursday’s game against the Detroit Lions “is not accurate,” but according to multiple sources, he offered little to make players believe he will be around much longer, leaving at least some players dismayed at the organization’s lack of direction.

That was before Nagy canceled all meetings scheduled for the rest of Tuesday afternoon and evening, the sources said, a highly unusual move that prompted one source to wonder if Nagy is resigned to his fate.

The Bears did not make Chairman George McCaskey, President Ted Phillips or general manager Ryan Pace available to discuss Nagy’s situation, and the first employee to field questions about the bizarre situation was special teams coordinator Chris Tabor in his weekly media session.

Thursday’s game between two teams at the bottom of the NFC North is inconsequential in the big picture for a Bears franchise clearly headed down the path of charting a new future. But it means a lot to players who are competing and putting out game film that could affect their future.

For Nagy’s future — and the team’s handling of it — to become a full-blown distraction is a troubling development made worse in a short week of preparation.

While Nagy told media during his midday news conference he was not scheduled to meet with his bosses this week — not surprising considering the quick turnaround for the Thanksgiving Day game — he told players after the walk-through that he did have a “productive” meeting with ownership, sources said.

“We have not talked this week, and that was scheduled,” Nagy told media while declining to say when he last met with ownership. “We have a good schedule over the years where we have discussions, like you guys always hear us talk about. We have constant communication. I always think it’s good and healthy, and so we stayed on course. With the bye week and then with the short turnaround and with game prep, we have not.”

Sometime between saying that and heading to the Walter Payton Center for the second walk-through, Nagy did meet with ownership, according to sources. Those sources said Nagy told players that it was about them moving forward and that no one knows what tomorrow will bring, and they said he broke down the team on “family.”

He did not shed any light on his status, the sources said, which left some players angry that he didn’t address the report head on, less than 48 hours before the team will try to end a five-game losing streak against the winless Lions (0-9-1) in a nationally televised game. It sets up to be a potential debacle for a franchise that has suffered through more than its share of embarrassments in the last decade.

Chants of “Fire Nagy!” rang out at Soldier Field on Sunday after the Bears allowed Baltimore Ravens backup Tyler Huntley, making his first NFL start, to drive 72 yards in 89 seconds for the go-ahead touchdown with 22 seconds remaining in a 16-13 defeat. That loss dropped the Bears to 0-4 after their bye week under Nagy, and they blew a lead in the final minute for the second straight game.

More troubling has been the lack of offensive improvement as the Bears rank 31st in total offense, 32nd in passing offense and 29th in scoring. The development of rookie quarterback Justin Fields has been the biggest storyline for the team, and he has been up and down with little consistency before leaving the Ravens game with a rib injury that will prevent him from playing against the Lions.

A fifth consecutive loss could have been enough to seal Nagy’s fate, but making the move in a short week might not have made sense. It seems entirely possible Nagy’s future has been decided and the Bears simply got everything out of order.

“I understand the media world and the social media world, I should say, in general,” Nagy said. “I understand that goes on as we’re going on inside the building. For us, you can’t focus on that. You have to stay focused on what you do every day, which is football and the X’s and O’s and all of that. It’s important to do that.

“In times like this, no matter what, when you go through this stuff, there’s learning lessons throughout all of it. You have to be able to understand that ... our job is to focus on day to day and winning this game on Thursday. And that’s it. That’s as simple as I keep it.”

The Bears took the focus off the X’s and O’s when they canceled the meetings scheduled after the walk-through. Everyone from fans to players is wondering what’s next.