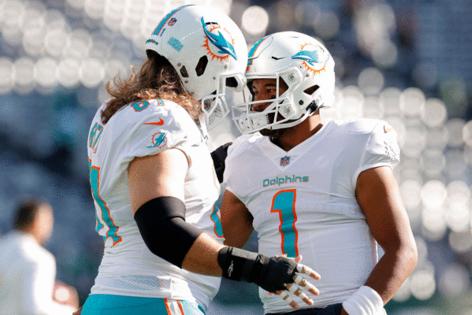 Not in this physical sport, where there are only 17 regular-season games and each of them carries substantial weight.

Especially not in South Florida seeing as how many of the Miami Dolphins players and coaches credit the improvements made during the team’s recent practice sessions — the ones that came after an embarrassing 26-11 loss to the Buffalo Bills in a game where numerous plays were short-circuited by player error — for the recent turnaround.

The Dolphins (4-7) might have struggled to beat two of the worst teams in the NFL — the Houston Texans and New York Jets — but they pushed around a playoff hopeful, the Baltimore Ravens in a Thursday night win.

The end result is a three-game winning streak, one that has helped this previously floundering franchise rebound from a dismal 1-7 start.

Four straight wins, which could happen with a home win over the Carolina Panthers (5-6) on Sunday, would show the fan base it’s once again okay to believe in this team.

“I would start by saying no mental errors. People are going out there when we run the plays that are scripted and we are not having to start things over. We don’t have to re-run a play, we don’t have to go back after we get through that set and ‘hey, pull up play six.’ We’re lined up right. We’re not chewing up the clock in the huddle,” said center Austin Reiter, who is starting because of injuries to Michael Deiter and Greg Mancz.

“Guys are going to get beat. That happens all the time. But I think No. 1 is not beating yourself mentally, everybody knowing the assignment and operating efficiently as an offense.”

Having a team that doesn’t beat themselves was at the foundation of the organization coach Brian Flores wanted to build.

Who remembers the “Takes No Talent” Wall, which sat at the back of the Dolphins’ Davie practice facility? When players made mistakes they were forced to run to the wall and touch it before returning to practice.

In 2007, he had an easier task with quarterback Michael Vick in trouble with federal law enforcement authorities. The Saints beat the Falcons 22-16 and 34-14, the latter in coach Bobby Petrino’s last game.

Not college basketball, but the four surviving NFL teams who are headed to their respective conference championship games.

Representatives from each of ...Read More

Almost 15 years after Byron Leftwich was surprisingly kicked to the curb by the Jaguars, it seems rather surreal that the exiled quarterback could be summoned back as the franchise's seventh head coach.

Jimmy Garoppolo is no stranger to this situation.

The 49ers covered up his anything-but-elite quarterback play for not one, but two playoff games only two seasons ago.

But eventually, as it always does, the burden of ...Read More