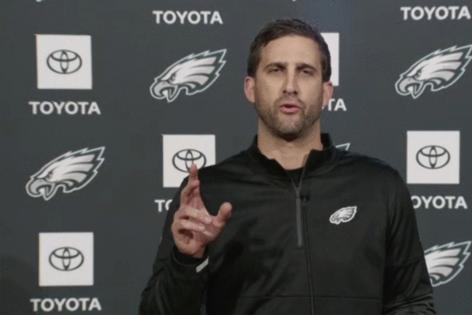 PHILADELPHIA — Forget, for a minute, about the offense’s chronic obsession with passing the football despite featuring an inept quarterback, young receivers, and a patchwork offensive line.

Set aside, for a moment, the timidity witnessed weekly by Jonathan Gannon’s marshmallow defense.

Focus, if you will, on the head coach’s complete lack of awareness and his exquisite ignorance of situational football.

With just two plays, Nick Sirianni on Sunday proved how ill-equipped he is, at this moment, to be the head coach of a Pop Warner football team, much less the NFL’s Philadelphia Eagles. We now know why no other team even offered him an interview. He had never called plays. He’d never been a head coach at any level. Every week, that inexperience shows.

There is no escape for Eagles fans. Owner Jeffrey Lurie won’t fire Sirianni during this season, and he probably won’t can him even after the season, no matter how badly the Birds play. Consider Lurie’s history.

Lurie took bold risks on all of his head-coaching hires: Ray Rhodes, Andy Reid, Chip Kelly, and Doug Pederson. None had NFL head-coaching experience. Lurie loves to prove himself smarter than the other owners, and while that’s not particularly difficult, Lurie hates to be proved wrong. Therefore, he won’t abandon Sirianni after one season in which the team was crippled with salary-cap damage wrought by Carson Wentz’s treachery — treachery that also left Sirianni with second-year quarterback Jalen Hurts, who is years away from NFL proficiency.

Nick the Quick seems years away from NFL proficiency, too.

In Sunday’s 33-22 loss to Las Vegas, he accepted a penalty instead of allowing the Raiders to punt. Then, with half of the game remaining, he tried an onside kick — in an era when rule changes have made onside kicks obsolete.

Let’s focus on the second one first.